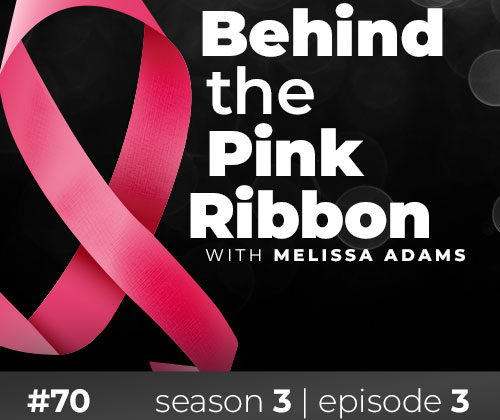 On this episode, Westray Corradine joined me on the podcast to share her story behind the pink ribbon. In 2011, at the age of 36, Westray was diagnosed with stage IV invasive ductal carcinoma after finding a lump on her back. Westray shared her course of treatments, as well as some of the complications and side effects that she experienced. She shared the current status of the cancer, as well as her treatments, and offered some advice for others who are battling stage IV breast cancer.

Westray Corradine was diagnosed with stage IV breast cancer in 2011 at the age of 36. She first presented with a lump on her back below her shoulder blade about the size of a penny. She had been feeling achy and feverish and went to see the doctor. It was thought that it was possibly some kind of amoeba after living in Mexico more than a year prior. In passing, she told her doctor that she had also found the lump on her back. A dermatologist was in the suite next to her doctor and was able to get her in for an appointment that day and performed a biopsy. She returned within a week and it was confirmed that it was cancer cells that originated in the breast. Not having a family history, cancer was the last thing that crossed Westray’s mind.

Westray had an MRI and PET scan that showed the cancer was present throughout her entire body. Her diagnosis was stage IV invasive ductal carcinoma. Her doctor wanted her to begin chemotherapy immediately. Westray had a port placed immediately but due to being anemic, she was not permitted to undergo traditional chemotherapy. Instead, she was put on oral chemotherapy for five years. She was somewhat relieved as she did not want to lose her hair because Westray was worried about what her daughters would think and feel.

Given that the cancer was estrogen/progesterone positive, Westray had her ovaries removed before undergoing any surgeries related to breast cancer. Almost a year later, Westray underwent a bilateral mastectomy with reconstruction. She was scheduled to complete 28 rounds of radiation therapy but was only able to complete 25 rounds due to the significant side effects. The radiation caused significant burning of her chest; it burned a hole in her chest to the point that the implant was exposed. Westray had to be treated at a burn unit. Due to the damage caused to the skin and implant, she underwent a latmissus-flap procedure to rebuild her breast. In her opinion, the radiation was the most challenging part of her treatment. While she experienced side effects from the chemotherapy to include numbness, tingling, and redness in her hands and feet, it was much less significant than the side effects of radiation.

After 5 years, Westray’s cancer returned. She indicated that with stage IV cancer, patients are always listening for the word stable. While the cancer is not curable after moving into the bones, the goal is to figure out how long one can go on chemotherapy until things become unstable, meaning that the cancer cells start to become active again. Westray was part of a clinical trial for about 3 months. Sometimes different things have to be tried in order to keep things stable.

Westray’s daughters were 6 and 7 when she was initially diagnosed with breast cancer. She was concerned about what they might think or feel but it did not seem to impact them much. Everything seemed to be concealed and Westray did not look sick. She recalled that she explained to her daughters that she had cancer but she doesn’t think they ever thought about her dying. Westray indicated that she told her daughters that the doctors would be giving her medication that might make her sick or may not make her sick. Westray indicated that the parents set the pace. If the parents are down, the kids will pick up on that. Westray was thankful for the support that her daughters received through school. The counselor, a personal friend, set up a group for Westray’s children and other children with parents battling cancer. Westray had recently started working at her daughters’ school just before her diagnosis and was thankful for the outpouring of support she received.

In July of 2019, Westray’s left side of her face became totally number. It was found that she had a tumor in her skull on the right side, which was impacting a nerve. Her doctor changed her medication and she also underwent 6 rounds of chemotherapy. This time, Westray lost her hair. Her daughters did not care that she lost her hair and taught Westray that she should not care either. In March, another PET scan revealed that there is now cancer activity in Westray’s liver. She was placed on another medication. Westray’s most recent PET scan showed that cancer has passed over into her brain. She openly shared that struggle of talking about it. She was placed on another clinical trial and was randomized to the standard of care rather than the new medication. Westray was bummed but her doctor indicated that if the clinical trial not available, she was have recommended standard of care anyways, which gave Westray some comfort. She is receiving chemotherapy again and is starting to lose her hair. A friend that also has cancer says less hair, less cancer. She will also have a lumbar puncture to provide a second form of chemotherapy. Her doctors are working to attack cancer within the liver and in her brain.

Westray recommends that stage IV patients trust their oncologists. It is important to have faith and trust in the oncologist. Westray felt so secure and had a gut feeling that her doctor was put there for her. She did not question or doubt anything. In addition, she shared that many people will come forward with so much advice. While she recognizes that it comes from a good place, it can be overwhelming. She recommends finding one or two people that have gone through something similar and connecting with them. Her last piece of advice is to have a lot of fair and be positive.