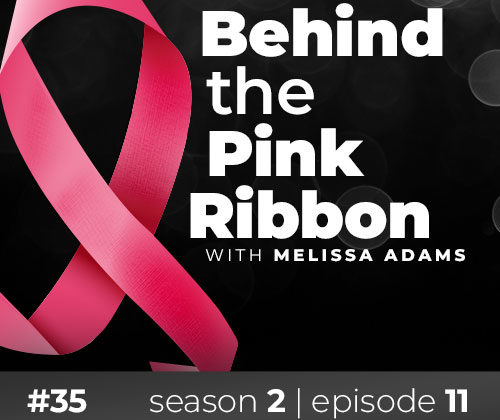 Tina Martel :
Not in the Pink

Tina Martel, a 2-time breast cancer survivor, artist, and author from Alberta, Canada, joined us on the podcast today to share her story. She was initially diagnosed in 2011 and again in 2015. She shares the struggles that she faced within the healthcare system in Canada and how she had to become her own best advocate.

Tina Martel is a two time breast cancer survivor, artist, and author of Not in the Pink. She was diagnosed with invasive ductal carcinoma in 2011 at the age of 54. Tina had been undergoing regular mammograms because her mother had been diagnosed at the age of 48. Two year prior to her own diagnosis, Tina has stopped getting mammograms. She found a lump in her breast and while she had always had cysts, she felt this lump was different. Her cysts were squishier and the lump felt hard. Cysts would come and go but this lump was hard and painful. In addition, it seemed to be getting larger.

Tina talked about the misconception that if a lump hurts then it cannot be cancer. She shared a story of her friend’s sister who had found a lump in her breast and was told by her doctor that because it was painful, there were no concerns that it was cancer. At Tina’s recommendation, her friend’s sister went for a mammogram and was diagnosed with breast cancer.

Following the mammogram, Tina underwent a biopsy. She described the biopsy as the one part of the cancer journey that she hated the most. She had asked for more freezing but was told that it was fine and that she just needed to basically suck it up. She endured the excision three more times before she was on all fours yelling at the doctor that if he did not give her more freezing, she was going to rip his arms off and beat him to death with them.

The waiting was the hardest part. She repeatedly told herself that things were fine and that it was not cancer during that time. Tina waited 3 weeks to a month for the results. She shared that one of the flaws in the Canadian health care system is the wait time for tests. She was told that the wait time for genetic testing was 2 to 3 years! Tina did not have the genetic mutation conducted at the time of her first or even second diagnosis. Tina opted to have the genetic testing done in the states because of the turn around time and was found to be negative for a mutation despite a significant family history.

The day that Tina received her diagnosis, she was hosting an event that evening at the university where she works. She continued to tell herself that it was not cancer so she thought she would simply slip out, get the results, and then return for the event. When the doctor entered the exam room, Tina was pacing. The doctor asked her why she was pacing and she said because she was scared. He told her that she should be because she had cancer. Tina spent 5 minutes with this doctor. He told her the diagnosis, said that someone from the cancer center would call her, and sent her on her way with no information and no treatment plan.

Tina waited for a few days for the cancer center to call but then realized that she was going to have advocate for herself. She started making phone calls and getting the ball rolling. She found a surgeon in a different city. A few week had passed and Tina still had not heard anything from the cancer center so she called but was told to wait another few weeks. By the time she received the call from the cancer center, Tina already had her surgery scheduled.

It was recommended that Tina undergo a lumpectomy. She struggled with making that decision but she opted for that procedure. During the surgery, it was discovered that the cancer had spread to her lymph nodes and she was then recommended for radiation and chemotherapy. In retrospect, Tina would not have done chemotherapy.

During the second diagnosis in 2015, Tina considered a double mastectomy with some consideration from reconstruction. She decided that she did not want to have implants and as it turned out that she was not a good candidate for the flap procedures. Reconstruction was off the table. When she saw her plastic surgeon, she had requested a mastectomy but the doctor asked if she was sure; she wasn’t. Tina again opted for a lumpectomy.

She refused chemotherapy during her second diagnosis and her doctor was in agreement. While Tamoxifen was recommended for Tina because the cancer was estrogen/progesterone positive, she opted not to take it. She shared that this was a battle for several years with her oncologist but she truly felt that this was not right for her.

Tina started to experience some tissue changes. She had decided that if the genetic testing came back positive, she would undergo a mastectomy. However, when the results came back negative, she decided to undergo the mastectomy anyways. Tina underwent her bilateral mastectomy in December 2019.

For Tina, one of the biggest concerns she has is that the after care treatment for survivors is not there. We experience changes to our physical bodies, our emotional well-being, and yet there is nothing that helps survivors navigate those issues. She believes that we need to drop the idea that any of this is easy.

As an artist, Tina did a lot of drawing/painting during her cancer journey and shared those with friends and family. A friend encouraged her to use her sketches to write a book. Tina wrote her multi-award winning book Not in the Pink, as a way to help people to understand what breast cancer survivors go through. The book is available on her website at notinthepink.ca