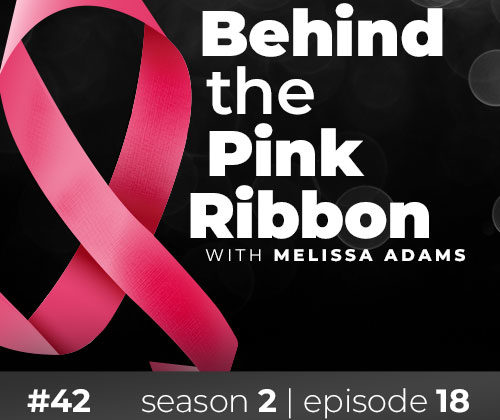 On this episode, Tara Dunsmore, an 8-year breast cancer survivor from Raleigh, NC joined us on the podcast. She was diagnosed at the age of 39 with stage 1 invasive ductal carcinoma. Tara talks about the challenges she faced during her treatment including being denied the surgery she wanted, the passing of her father, and a negative experience with areola tattooing. Through her experience, she founded Pink Ink Tattoo because she believes survivors deserve a better experience than what she had.

Tara Dunsmore, an 8-year breast cancer survivor from Raleigh, NC, joined us on the podcast to share her story. She was diagnosed in 2012 at the age of 39 with stage 1, invasive ductal carcinoma. She is also the founder of Pink Ink Tattoo and focuses on areola tattooing following mastectomy.

At the age of 30, Tara’s primary care physician recommended a baseline mammogram due to size of Tara’s breasts and wanted her to continue with mammograms every 2 years. Tara opted to have a mammogram every 3 years. When she was 33, they found something small in her breast and she was sent to a breast surgeon to have it removed. It turned out to be fatty tissue. She was to go back 2 years later but she waited 3 years and went back at 36; everything was fine. At her next mammogram, her doctor told her not to wait another 3 years for a a visit.

Six months later, something in gut told her to go get a mammogram. She had the mammogram per usual but in retrospect, the technician had given her a look that might have suggested something was wrong. A few days later, he doctor called and asked for her to meet with a surgeon and had already made Tara an appointment that day. Tara was unsure of the urgency for the appointment. In addition, the surgeon was located in Raleigh, 20 minutes away from the surgeon that had done the previous surgery.

Tara was told that the doctor would likely have all of her records but Tara offered to pick them up. Tara and her oldest daughter went to the hospital to pick up her records. As a nurse, Tara had seen many of these records before and when she opened the envelope, her hart dropped. Tara went home rather than going to the surgeon’s office. As she was trying to explain to her husband what was going on, she was at a loss for words. The pathology report indicated that she had a 5 cm tumor with what looked like spider legs attached to it near her armpit and the radiologist indicated that was stage 5.

Tara and her husband went to the scheduled appointment and spent hours being assessed. Despite numerous mammograms and ultrasounds, they could not find the tumor but they did note calcifications. Tara was told that she can be monitored for 6 months or have a biopsy. A few days later, she had a stereotactic biopsy and had multiple extractions. Results of the biopsy showed that the calcifications were malignant.

As soon as Tara heard the word cancer, she knew she wanted a double mastectomy. She told her doctor that if she can have reconstruction, great and if not, she was ready to accept that. The doctor felt that Tara was being too aggressive and recommended a lumpectomy, radiation, and Tamoxifen instead. Tara went round and round with the breast surgeon and even offered to pay for it. The surgeon had scheduled Tara for a bilateral mastectomy on March 15 but two days prior to surgery, she got a call from the surgeon that insurance was rejecting the surgery and indicated that surgery would be rescheduled later in the month. Tara was devastated. At the same time, her father was taken to hospital. She had to travel back to Ohio and her father passed away on the day that she was scheduled to have her surgery. On Tara’s way back to North Carolina, the breast surgeon called and said she was going to do a lumpectomy. Tara felt like she had no voice.

While in recovery from the lumpectomy, the breast surgeon told her husband that she placed rods in for radiation. Tara’s husband questioned this decision. Tara unsuspectingly woke up with rods for radiation. The surgeon did not even see Tara in the recovery room. Tara had received a call from the nurse prior to her one-week follow up and told Tara that the cancer had grown and progressed from DCIS to invasive ductal carcinoma. When Tara saw her doctor at her follow-up appointment, she told her doctor that she could not work with her if she was unsupportive.

The experience she had with the nurse doing the tattooing was not what she had expected. She thought it was be special and a celebration. She thought she would have a choice but was only offered 3 options. Tara shared that she experience significant pain through the process as well.

As she was leaving the office, there was something that told her she was going to do something different. She had lost her faith as she struggled through cancer and losing her dad. When her plastic surgeon asked her how the areola tattooing was, she told him that it was not acceptable and she was going to go train with the best because survivors deserve better.

In April 2014, following her training, Tara founded Pink Ink Tattoo. She only wants the best for survivors and make the experience about them. She makes sure that the color is perfect before tattooing. The ink she uses is specifically designed for breast cancer. It does not have any heavy metals and does not interfere with MRI or ultrasound. Patients pay for the services up front but are provided with a detailed receipt to submit for reimbursement of services. Tara only works out of plastic surgeon’s offices and is currently workin in North Carolina, Mississippi, and Texas.