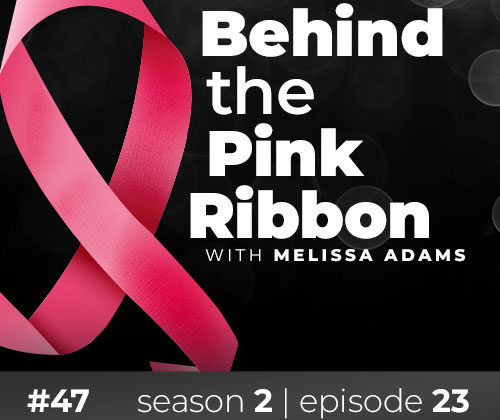 On this episode, Sasha Milicevic shared her breast cancer journey. Sasha was 43 when she was diagnosed with stage 0. Sasha talked about having a lumpectomy followed by a mastectomy, which she had out not pure fear and ignorance. She talks about the complications following the mastectomy and the reconstructive process, and her regrets around reconstruction. Sasha felt unsupported in the breast cancer community; almost as if she had done something to cause the complications she experienced.

Sasha Milicevic, from Serbia, was diagnosed in 2013 with Stage 0 breast cancer at the age of 43. At the time of her diagnosis, she was living in Jacksonville, Florida, which is where she underwent all of her treatments before landing in her current home in Pittsburgh, PA.

Sasha was having regular mammograms. She had dense breasts and a history of cysts. She had gone in for her annual mammogram but was asked to return for an ultrasound as there were calcifications seen on the mammography. Without hesitation, Sasha began googling calcifications. When the radiologist had called to talk to her about what was seen, she was told that she had micro calcifications and knew that it was not good. She was told that she possibly had ductal carcinoma in-situ. She was scheduled for a biopsy the following day. Within the same week as her mammogram, she was diagnosed with breast cancer.

The original plan for treatment was to have Sasha undergo the BRCA testing. If the results came back negative, her doctor recommended that she undergo a lumpectomy followed by 6 weeks of radiation. Sasha indicated that she has a significant family history of breast cancer and since she was under the age of 45 years, her insurance company covered it without any difficulty. Sasha has 2 aunts that were diagnosed with breast cancer. One was diagnosed in her early 40’s and the other in her 70’s, both born in Serbia. Results of the BRCA panel came back negative.

Sasha then underwent an MRI and another questionable lesion was found in her breast. It was assumed that it was hyperplasia and that she continue with the original plan. Following the lumpectomy, Sasha’s doctor shared that he had removed approximately 4 cm of DCIS but did not get clear margins. The lesion that was assumed to be hyperplasia was also found to be DCIS. At that point, her doctor recommended that she undergo a mastectomy.

Sasha shared that she reacted out of fear and ignorance when she opted to have the bilateral mastectomy. She did not realize at the time that there was no significant difference in mortality rates despite the kind of surgery. She had wanted to have the least invasive surgery and thought she was would be done after the lumpectomy and radiation. She did not know what metastatic breast cancer was and thought that having a bilateral mastectomy would eliminate any cancer of recurrence. She thought she would have peace of mind after her mastectomy.

Had Sasha known the truth, she would not have opted for a bilateral mastectomy. For her, it makes no sense to cut off healthy tissue. Sasha equates it to breaking a finger but cutting off the whole arm. She feels that no one is talking about the difference between early stage and metastatic breast cancer. People are not being educated. Statistics are being thrown out but those statistics are a misrepresentation of our odds.

Sasha appreciates doctors who tell the truth, not doctors who say that they will cure you. When someone is diagnosed with metastatic breast cancer, it is light being hit with a freight train because people are being told that they are cured. Many survivors don’t even know that developing metatstatic cancer is an option. Sasha indicated that there is no magic timeline for recurrence but many keep it as some sort of holy grail and celebrate it. She feels this creates a division between those who are early stage survivors and those who have metastatic disease, and that they are to be feared. Sasha indicated that we are all just one scan away from that kind of diagnosis and should be working together.

Sasha regrets her decision for reconstruction. Due to being high risk and complications following the mastectomy, she had delayed reconstruction. She experienced necrosis and was not healing properly. It took her 3 months to heal and she had to undergo a revision on the right side. She suffered from a bacterial infection. She opted for a deip-flap procedure, which also resulted in complications. She had internal bleeding, stopped breathing, lost consciousness, and had to receive a blood transfusion. Three weeks later, her incisions opened up and it took her 7 months to heal from that procedure.

People think that undergoing a mastectomy and reconstruction is easy, that it is just a book job. Sometimes people have smooth sailing and while it is always hoped for that the surgeries and reconstructive processes will be smooth, sometimes it is not. Sasha indicated that when individuals have complications during surgery, they are looked at as having done something wrong to cause the complications, very much like metastatic survivors are looked at as though they had done something wrong to cause the cancer to return. This is why the metatstic survivor community really resonates with Sasha.