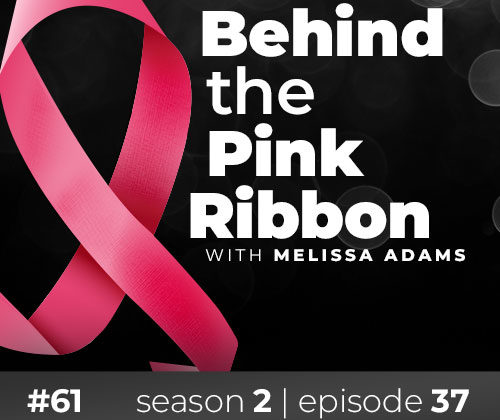 Today’s guest is Robyn Towt, a two-time cancer survivor and co-founder of the Breast Implant Safety Alliance (BISA). Robyn was diagnosed with Hodgkins Lymphoma in her 20’s and then breast cancer 20 years later. She openly shares her experience with breast implants that led her into patient advocacy and becoming a co-founder of BISA. She talks about the mission of BISA and how the alliance is working to create change that ensures the safety of patients.

Robyn Towt was diagnosed with Hodgkins Lymphoma at the age of 23 years. Her treatment included extensive and aggressive radiation to her head, neck, chest, and abdomen. Due to the radiation she received, she was considered to be at high-risk for the development of secondary cancers. Throughout the years, Robyn had several scares including tumors on her lungs, tumors on her thyroid, benign tumors in her breast, as well as basal cell carcinoma.

Given her high-risk status, Robyn began having mammograms at an earlier age. In May 2017, at the age of 44, Robyn had a routine diagnostic mammogram and ultrasound that detected something in her breast. The tumor was so deep in the tissue that she would not have ever felt it through a self-breast exam. By the end of that week, Robyn had undergone a biopsy and within a week received the formal diagnosis of breast cancer.

Robyn had stage 1, invasive ductal carcinoma. She made a very quick decision to have a bilateral mastectomy. Her current oncologist was pretty conservative and may not have made the same recommendation but she did not provide the doctor an opportunity to give her any other option. She made it clear that she wanted to have a bilateral mastectomy. It was recommended that Robyn undergo chemotherapy but radiation was off the table due to the extensive and aggressive treatment she previously received. Robyn felt that chemotherapy was not right for her and that surgery would be sufficient. Her team of doctors disagreed so she fired them and got a new team.

Initially, Robyn was not interested in reconstruction. She wanted to have the cancer removed and move on with her life. However, her doctor made it sound like reconstruction would be really easy and Robyn was talked into having reconstruction. She opted for expanders followed by implants. She did not want to go direct to implant due to the unknown possible complications from radiation. Robyn recalls that she asked all the questions about reconstruction but she was not told about the many women that were sick with breast implants.

While Robyn healing well physically from the surgery, she became sick from the expanders and implants. Her entire body had shut down. She experienced pain with the expanders but it was ten times worse with the implants. She immediately felt as though something was not right in her body once the implants were put in place. She had headaches, migraines, neck and shoulder pain, and rashes on her chest and legs. She struggled with sleeping, had severe anxiety, and had heart palpitations. When she went back to her surgeon, Robyn was given lots of different medications but her surgeon did not bring up any concerns that her symptoms may be related to her breast implants.

Within 24-48 hours of explanting, Robin felt one hundred percent back to normal. She feels that she likely had this experience because she had the implants for a short time but many women take longer, especially if they have had implants for years. For Robyn, breast cancer was not the worst experience, it was the experience with implants.

Robyn was angry that so many other women are likely suffering from breast implant illness but don’t know it and may be blaming chemotherapy or radiation. This was her motivation for becoming an advocate for others. In spring 2019, Robyn co-founded the Breast Implant Safety Alliance. The primary focus of the alliance is patient advocacy. The alliance works alongside medical professionals, manufacturers, health organizations, and politicians to ensure proper informed consent in terms that can be understood by the patients. The alliance is working at the local level with hopes of making changes at the federal level.