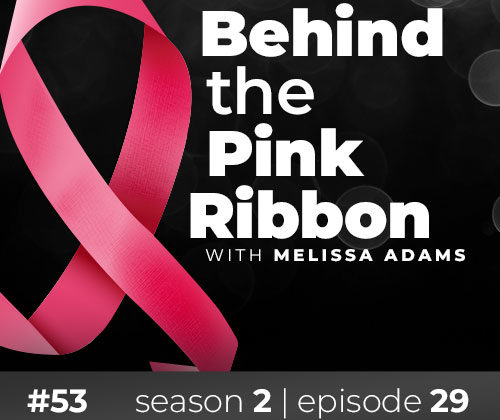 My guest on today’s show is Petula Kincaid. She originally hails from Ireland but currently resides in Hong Kong. Petula shared her breast cancer journey and how she was too busy with work to make time for her routine mammograms. She also talked about her specific treatments and the side effects she has experienced. She shares where she is with reconstruction and offers advice for everyone to slow down, listen to our bodies, and get regular body checks. Listen in as Petula shares her story.

Petula Kincaid joined us on today’s podcast episode to share her breast cancer story. Petula was diagnosed with stage 2B, grade 3 invasive ductal carcinoma at the age of 54. Petula was doing self-exams but was not having her regularly scheduled mammograms because she was always too busy with work. Petula had a unilateral mastectomy without reconstruction, chemotherapy, and radiation. She currently takes an aromatase inhibitor and had physical therapy one time per week. Petula encourages others to reach out to a community following a breast cancer diagnosis. She also encourages that people listen to their bodies, look after themselves, and don’t put work first.

Show Notes:
Petula was diagnosed with stage 2B, grade 3 invasive ductal carcinoma at the age of 54. Working in the medical field, Petula was always too busy and put off having her yearly mammograms. She always did self-body checks but was not having routine mammograms. In November 2018, while on holiday in Vietnam with a girlfriend, Petula noticed the lump in her breast and felt it. She recalls that it was painful and sore. Upon returning from holiday, Petula showed her husband and he said that it did not look good.

Petula then went to see her general practitioner. Without having done any real tests, her GP told her that she had breast cancer. She did not have any qualms with this as she prefers that people be straight forward with her. Over the next 2 weeks. Petula went through several different scans and tests including a mammogram, ultrasound, and PET scan. After 2 weeks, she was undergoing a unilateral mastectomy. Petula shared that she and her husband had private medical care but in general, Hong Kong is pretty speedy with their medical care.

Thinking back to when she felt her lump, Petula’s immediate instinct was that it was breast cancer. She isn’t sure if she could actually feel it growing or if it was anxiety but she felt like it really grew over night. The breast specialist told Petula that it was a fast growing tumor and was sized at 4 cm. Petula recalls the specialist asking her how she didn’t notice the lump when it was 2 cm but she really felt like it had just grown overnight.

Petula underwent the unilateral mastectomy on the left breast and opted not to do reconstruction at this time. At this time, she is not too bothered by being flat. Her focus at this time is on healing. While everyone is different, Petula feels that she need a little bit more time before going back into the hospital again. While reconstruction is not off the table, she is just very chill about it right now.

In addition, the the mastectomy, Petula underwent 4 rounds of chemotherapy. She did not lose her hair during chemotherapy, which came as a surprise to her and her oncologist. Petula was offered radiation as a bonus therapy and underwent 25 rounds of TomoTherapy radiation, which is very targeted. Petula found that radiation was the most exhausting and really tough in comparison to all other treatments. Toward the end of radiation, she suffered third degree burns. She repeatedly expressed her concern about burning but was told that she was fine. Toward the end, she was finally prescribed a gel but it was too late. At this time, she is still healing and continues to have pain on that side. During radiation, Petula’s husband and friends noticed that she was really struggling with the treatments more so than any other treatment.

Petula had 3 of her lymph nodes removed and all were negative for cancer; however, she has experienced limited mobility as a result. She is currently undergoing physical therapy one time per week and it is thought that she is experiencing a mild form of lymphedema. She does as much physical activity as she can to keep up her mobility. Given that the cancer was estrogen positive, Petula is taking an aromatase inhibitor. One of the side effects she has experienced is stiffening in her body. She feels as though she has arthritis. In addition, her hair started to fall out after starting the AI.

Petula offered a number of great tips. She tells all of her friends, family, and colleagues to get regular body checks and mammograms. She encourages people to trust their instincts and listen to your body. In retrospect, she realized that she had been feeling off color but was always too busy. Sometimes, we have to stop and have a body check. For those newly diagnosed, Petula recommends reaching out to some form of community as cancer can be really lonely, even when surrounded by loved ones. Those that have not had cancer don’t fully understanding what a cancer patient is going through. Petula has found a lot of support through Beyond the Pink Moon on Facebook.

Reach out to a community, listen to your body, look after yourself, and don’t put your work first.