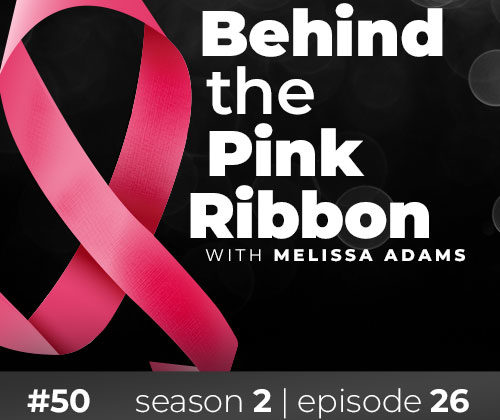 Nia Hammel joined us on the podcast to share her breast cancer story. In 2016, at the age of 35, Nia was diagnosed with stage 2B invasive ductal carcinoma. She thought the lump she had was fibrocystic and due to her menstrual cycle, until the lump started to dimple. Nia wishes she had been more educated about breast cancer so that she could have advocated for herself. She talks about her family history of cancer, her treatments, and her struggles with experiencing so much loss.

Nia Hammel was diagnosed in 2016 with Stage 2B invasive ductal carcinoma at the age of 35. She had gone in for her annual check up in 2015, which was normal. Sometime between September and December, she notice a lump but thought that it was fibrocystic. But then her breast started to dimple. Her doctor knew that her mother had been diagnosed with breast cancer but she had not ever been talked to or sent for a mammogram.

Nia simply thought that the lump she had was due having a history of fibrocystic breasts. She wishes that she had been a little more educated and had pushed to be seen sooner. Instead she agreed to be seen at her annual check up, but that was even pushed back to the following month. Nia really thought nothing of it.

In March, Nia saw her gynecologist. When the doctor viewed her breast, she immediately made a recommendation of an ultrasound and a mammogram. The doctor began asking more questions about Nia’s family history and sent her for blood work to test for a possible genetic mutation. When Nia asked her doctor if she should be concerned, her doctor indicated that she did have some concern. Following the ultrasound and mammogram, Nia was sent for a biopsy. She recalls being highly anxious during the biopsy. After, she was sore but still was not in the head space of thinking it was cancer.

Nia was seen in her doctor’s office to tell her that she had breast cancer. She had her support system with her but was still in shock. She also found out that she tested positive for a BRCA2 mutation and found out that she was HER2+. Nia immediately thought to herself, “Am I going to die?, What is my life going to be like?” Nia did not want to have her breasts removed.

Following Nia’s genetic testing, her mother and several of her aunts were also tested. One of Nia’s aunts did not want to get tested and Nia was heartbroken over that decision. She feels like it is fear that has stopped her aunt from getting tested but she has learned that she has to respect people’s boundaries.

Nia wanted to have all of the information that she could get so that she could be prepared for the medical and physical part of what was about to happen to her body. She watched videos and researched information online. She knew that she could not necessarily prepare herself for the emotional side of this.

Nia’s doctor had recommended that she undergo surgery followed by chemotherapy and then radiation. Nia told her doctor that she needed to have time to process the information and that she wanted to get a second opinion. She contacted another hospital and was told by the oncology nurse that she could wait as nothing would change in 30 days. Nia had the consultation with a doctor who also recommended the same course of treatment as the first doctor and told Nia that she could wait.

A week later, Nia started to have a lot of pain in her breast. She went back to see her doctor and was told that they needed to revise the plan as the cancer was growing and growing rapidly. Nia underwent 16 rounds of chemotherapy first. She feels that had she not undergone chemotherapy, she would not have been as prepared for the mastectomy. However, she still was not prepared for losing her hair. When Nia began Taxol, she thought she could do 4 treatments rather than 12 treatments but she became bedridden, struggled to walk, and was in the hospital twice for pain management after the 1st round so she pushed the treatments out.

Nia finished chemotherapy in October and had a bilateral mastectomy in November. She remembers that she was fine emotionally after the first week of being finished with chemotherapy. She was happy to be done with treatments but she struggled for 3 weeks after.

Nia underwent radiation following her surgery. She did not want to have to go the hospital every single day for that treatment but she shared that it was her favorite part of the journey. She grew to love her radiation team.

Nia indicated that her concern is that patients don’t hear enough about the after affects of the treatments that we go through. She feels that the doctors don’t always know. She feels that if people had the information, it would help them to be more prepared for what they are about to endure.

Due to the BRCA2 mutation, Nia has undergone an oophorectomy. She still has her uterus in tact for now. Her doctors indicated that they wanted to ease her into full menopause. Nia was given the option of taking a medication but one of the side effects was uterine cancer so she declined.