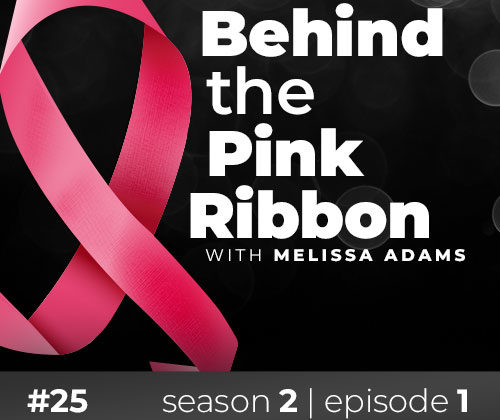 Michelle Weaver Knowles :
The Voice for Others

On this episode, Michelle Weaver, a 21-year breast cancer survivor, joined us on the podcast to share her story. She was 38 years old when diagnosed with stage 2 invasive ductal carcinoma. Michelle was triple-negative and carried the BRCA1 mutation. Through her own journey with breast cancer and genetic testing, as well as the experience of losing her sister to this disease, Michelle went back to school to become a Nurse Practitioner and now has her own practice, Ava Health.

Michelle Weaver was diagnosed with stage 2 invasive ductal carcinoma in 1998 at the age of 38 years. She was triple negative and BRCA1. Michelle’s sister, Sherri, had passed away in 1994. When Sherry was diagnosed with cancer, Michelle started having mammograms to monitor her breast health. She previously had a lump that was excised through biopsy and found to be benign.

She began experiencing breast pain that felt like she need to have breast milk let down. She had an achy feeling in her breasts as though she was breast feeding. Michelle had undergone a mammogram 10 months earlier and it came back clean. Following some imaging of her breasts, Michelle was thought to have had a breast abscess. She underwent a frozen dissection and found out immediately following the procedure that it was an aggressive breast cancer. She recalls being in the recovery room surrounded by her doctors and husband, and knowing that something was wrong.

At the time of Michelle’s diagnosis, genetic mutations were just being discovered and genetic testing had just started in 1996. Michelle had heard about the testing and had asked to have it completed. Michelle had her blood sample taken during the lymph node dissection, at which time, they also put in a port for subsequent chemotherapy. The results of the genetic testing indicated variant of uncertain significance.

Michelle was a candidate for a bilateral mastectomy but her providers that it was overkill. Michelle indicated that she had taken the path of not being a very good advocate for herself and opted to follow the recommendation of her doctors to have a lumpectomy followed by chemotherapy and radiation.

Following her treatments, Michelle began to worry about her daughters and began doing research on BRCA1 mutations. Approximately 3 years later, she decided to undergo a bilateral mastectomy. At that time, she had undergone a breast MRI, which was done 1 breast at a time with several days in between to allow for the contrast to exit the body. Michelle had been experiencing pain in her ribs and the MRI showed something suspicious. This was unsettling for Michelle as this was the same location that her sister had experienced a recurrence of her breast cancer.

Michelle underwent the bilateral mastectomy with tram-flap reconstruction. Due to having radiation as part of her initial course of treatment, Michelle was not a candidate for implants. The doctor used her rectus abdominis to recreate the breast mounds. Since the rectus abdominis is the stabilizer of the core, Michelle is weak in her abdomen and is unable to do sit-ups. Following the mastectomy, it was discovered that Michelle had benign tissue that was agitated from the radiation, which is what had shown up on the MRI.

Michelle was followed by her doctors until she was 5 years out from her diagnosis. Although she is not regularly followed at this time, anytime she has to be seen at the hospital for something, her breast cancer history comes up and at times, additional testing is conducted.

Prior to finding out that she was BRCA1 positive, Michelle had her left ovary and uterus removed due to having endometriosis in her 20’s. She is thankful that she had already had that done and feels that there is a potential link between breast cancer and endometriosis that she would like to further research.

In terms of her family history, Michelle’s sister was never tested for the gene. She passed away in 1994 and genetic testing was not being conducted at that time. However, they can only presume that she was positive for the mutation. While Michelle’s family is large, there have not been many cancer in her family. She does have a first cousin from Michelle’s maternal uncle that was diagnosed with breast cancer at the age of 34. This cousin was told that it was unlikely she had the mutation because of the misconception that the mutation is only passed on from the mother. The cousin was aware of Michelle’s genetic mutation but did not want to know at that time. At 38, this same cousin had another primary diagnosis and was tested for the genetic mutation. She shared the exact same genetic mutation as Michelle. While BRCA1 is primarily associated with Achkenazi Jewish, Michelle is Irish and Polish. In addition, Michelle’s brother is also BRCA positive. Her younger sister and Michelle’s daughters are negative. Michelle has a male cousin that has prostate cancer and would be a candidate for testing but has not yet been tested.

Michelle went back to school to become a Nurse Practitioner to be able to educate people on genetic testing. She spends an hour with her patients talking about basic genetics, insurance, variant of insignificance, and psychosocial issues. She uses her own family history to draw out a family tree. She wants to be a provider to follow the person through the whole process. She does not force anyone to get tested, as it is a personal decision, but Michelle wanted to have more tools in her tool belt to help others. When Michelle talks in public and to providers, she shows a picture of her family from a family reunion to show the hundreds of people that can be impacted by genetic testing/information.

Michelle talked about having guilt for so many years because she and her sister, Sherri, had the same disease and Sherri passed away but Michelle survived. She had a lot of post-traumatic growth to figure out why Sherri passed and Michelle survived. Michelle realized that her sister lives on in her heart and through her hands as Michelle is helping spread the word about genetic testing. Michelle shared that Sherri would have been happy to be the person to motivate Michelle to do what she is doing to help others. Michelle opened her own practice. As she was exploring names for her practice, she wanted to honor her sister in some way but Sherri’s health did not seem to be a good fit. Michelle reached her first name, which is actually Ava, and found that the meaning of Ava is “voice for others”. She named her practice Ava Health.