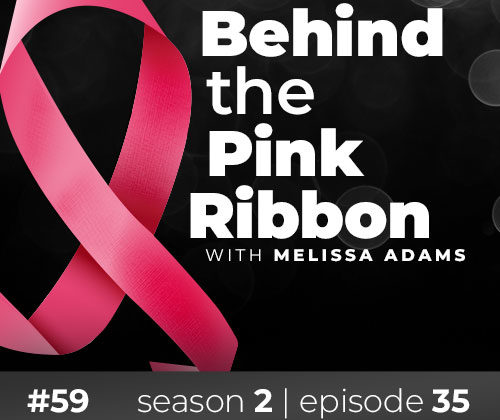 Melissa Robman was 39 when she was diagnosed with stage 2 invasive ductal carcinoma. She found her cancer after her new puppy repeated stepped on her breast and she felt a lump. Melissa talked about the marathon diagnostic testing she had all in the same day, as well as her course of treatment. She shares where she turned to for support. She feels there is a reason she has gone through cancer. Melissa shares that she feels that it is good to find some positivity in the journey and make lemonade from lemons.

In September 2018, Melissa Robman, was diagnosed with stage 2 invasive ductal carcinoma at the age of 39. Melissa was just 2 months from her 40th birthday and had not undergone a mammogram.

Melissa and her husband had adopted a terrier about 2 weeks prior to her finding a lump in her breast. The puppy climbed up on her repeatedly and put her paw on Melissa’s breast in the same area. Melissa noticed that the spot started to become sore. When she touched it, she felt something that was not there before. At that time, she was not doing regular self-exams. In addition, nothing had been found when she was examined by her gynecologist 9-10 months prior.

Melissa called her gynecologist for an exam and was told that she needed to have diagnostic testing completed. Melissa had gone in thinking she would just be having a mammogram; however, following the mammogram, she then had to have an ultrasound, biopsy, and then another mammogram. Melissa remembers that it took about 4.5 hours. It was a long, scary process. She thought she would have the mammogram and be finished. Melissa received the results 2 days later that she had breast cancer.

At the initial appointment, it sounded like the treatment plan would be the best case scenario. She was recommended for a lumpectomy followed by radiation. However, her surgeon suggested that she have an MRI before surgeon. During the MRI, a bunch of other spots were found in her breast. As a result, Melissa had to undergo another ultrasound, two more biopsies, and another mammogram. It was discovered that those spots were also cancer. At that time, a mastectomy was recommended.

Melissa opted for a unilateral mastectomy of the impacted breast. She had talked at length with her surgeon about the likelihood of getting breast cancer on the other side. In retrospect, she thinks that maybe she should have done the bilateral mastectomy. Melissa was not focused on reconstruction at the time of her surgery but her doctor suggested that she explore all of her options. After meeting with the plastic surgeon, Melissa opted to have a tissue expander put in place with fat grafting to rebuild the breast.

Melissa found support through the Cancer Support Community. She participated in a breast cancer support group. She found it helpful to meet other women going throught the same stage of treatment. She wishes she had Behind the Pink Ribbon podcast to listen to while going through her treatments. Her husband was a significant source of support and went to every chemotherapy session and all appointments with Melissa.

Melissa reminds us that we are stronger than we think. For some reason, she thought that she could not do this but doesn’t know why. She shared that it we just have to put our heads down and move forward. Melissa believes that she has gone through cancer for a reason and is trying to figure that out. She feels that if we have to go through cancer, we might as well turn lemons into lemonade and find some positive in all of it.