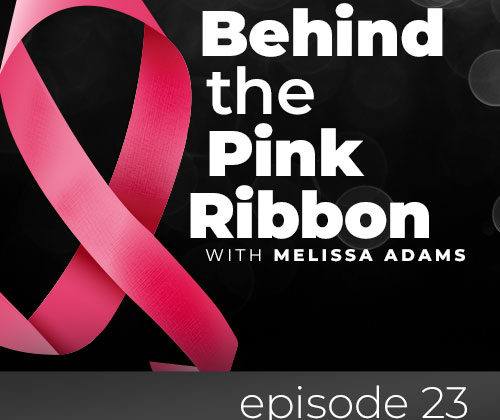 This week, Melissa Brumbelow, a 10-year breast cancer survivor joined us on the podcast. She shared that she was one of two patients at her OBGYN’s office recommended for genetic testing due to significant family history. Melissa was positive for a genetic mutation. She thought she had some time to be closely monitored before a diagnosis of cancer would happen. But a month later, through an exam with breast oncologist, Melissa was told she didn’t have time to wait- cancer was there already.

Melissa Brumbelow, a 10 year breast cancer survivor, joined us on the podcast. In mid-March 2009,at the age of 28 years, Melissa went for a regular check-up with her OBGYN. During that visit, her doctor spoke to her about new genetic testing. She was only the 2nd patient her doctor had talked to about this new testing. After hearing the information, Melissa agreed to having the testing completed.

At that time, there were 17 cases of cancer within her immediate family. Both of her grandmothers, maternal and paternal, had gone through breast cancer. She had family members as young as their early 20’s who had been diagnosed with cancer and undergone a mastectomy. Due to her family history, Melissa had been monitored through mammograms since the age of 21 years.

Within 3 weeks of having the genetic testing completed, Melissa was called back into her OBGYN’s office to go over the results. Since this kind of testing was so new, her doctor had a phone conference with Myriad to be sure that she fully understood the information. The results indicated that she was 87% positive for breast cancer and 44% positive for ovarian cancer by the time that she was 40 years old. Given this new information and that fact that Melissa’s latest mammogram was crystal clear, Melissa’s doctor recommended that she be seen every 6 months for blood work, mammograms, and ultrasounds. She also recommended that Melissa see a breast oncologist every 6 months as well. Melissa felt like this plan would have her fully covered and protected.

Melissa was unprepared for what the breast oncologist said next. With tears in her eyes, the breast oncologist told Melissa that they did not have 10 years to wait. Cancer was there now and she wanted to get it before it got Melissa. Thankfully Melissa was not alone at that appointment as she was blindsided by this news. Her then husband was with her.

Melissa noted that the marriage to her husband did not make it through her surgeries and reconstruction; in the middle of her breast cancer treatments, she and her husband were divorced. She learned that you find out very quickly what your marriage is made of when there is a medical crisis. The final straw for her was when she arrived home from her 3rd of 5 surgeries with bandages and drain tubes hanging from her sides and her husband told her that he did not marry a younger woman to have to take care of her; he married a younger woman to take care of him. He also indicated that he did knot know what she was going to do with all of her scars. Melissa was done.

With the divorce from her husband in the middle of this, Melissa does not think that she would have been able to make it through without the support of her medical team to help keep her strong. She thought about what her ex-husband had said every step of the reconstructive process and was grateful for all of those that had gone through reconstruction before her so that her process could be seamless.

Melissa shared that Myriad was the only company in the United States testing for cancer-specific genetic mutations. After a year, they changed the way that they communicated results to patients. They no longer provided specific percentages as there were many lawsuits. Individual were receiving the information in black and white percentages, and making life changing decisions as a result.

Melissa sought out support in many different ways. While she has a long history of cancer in her family, the way that she found out was unique. She wanted to find others that had found their cancer in the same way but struggled to do so. Melissa became a source of support for others. She often spoke to those who were newly diagnosed and shared her story. She also talked about her team of doctors and encouraged others to seek a second opinion if their team did not sound like Melissa’s.

Within a few months of her diagnosis, Melissa realized that this was not right and she began to journal and write. Initially, she thought it was going to be therapy for herself but it became more than that. Melissa began using and sharing her medical photos so that others were not unprepared to go in for such a life-altering procedure. Melissa wrote a book- Perky Mutant- that provides a step-by-step guide of the reconstructive process that she went through. She included medical progress photos from her procedures. She wanted others to understand what it is going to feel like and what it is going to look like.

Melissa is beyond grateful for her OBGYN who was on the cutting-edge of testing for genetic mutations. She feels that her doctor saved her life by recommending the testing. Otherwise, Melissa would have had no clue, the cancer wouldn’t have been found, and it may be have too late. At the time that the breast oncologist completed the exam, she found a total of 5 tumors in Melissa’s breasts. At the time of her bilateral mastectomy, it was discovered that the cancer was aggressive and growing quickly. There were a total of 10 tumors in her breasts at the time of her surgery.

Melissa shared that there are so many lessons learned through a breast cancer diagnosis. One of the biggest lessons that she learned was that scars give character. She would not trade a single lesson learned in those 2 years for a single scar on her body. She will proudly bare the scars for the life lesson she has learned.