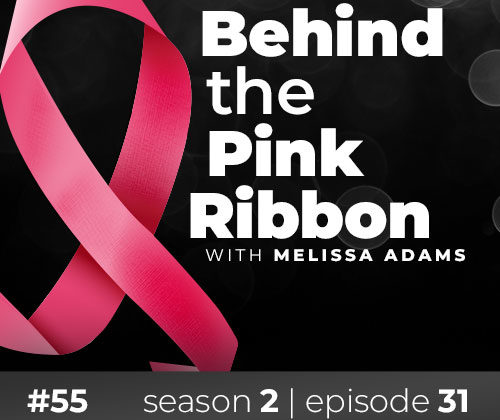 On this episode, Masumi Goldman joined us on the podcast. She is a previvor who opted for a bilateral mastectomy with immediate reconstruction. Masumi shares her the dramatic story of finding out a genetic mutation was present on the paternal side of her family but years later finding out that she actually had a genetic mutation from the maternal side of her family. She talks about the decisions she had to make, the challenges she faced, and her book, Rise and Thrive.

Masumi is a 42 year old mother of two and author of Rise and Thrive. She tested positive for the BRCA2 gene mutation and opted for a a prophylactic bilateral mastectomy in October 2018. Masumi is an only child with healthy parents and grandparents. There was no immediate family history of cancer. In 2010 or 2011, Masumi received an email from a second cousin, one removed. The cousin shared that she was diagnosed with ovarian cancer and had tested positive for a BRCA1 mutation, as did her two daughters. In tracing her family history, she discovered that the mutation was passed from her grandmother who had several siblings, one of them being Masumi’s paternal great grandmother. Masumi’s cousin felt a responsibility to reach out to family members to share the information.

At the time, not many prophylactic surgeries were happening as it was pre-Angelina Jolie. Masumi was not particularly panicked by the information but thought it was worth mentioning to her gynecologist at her scheduled appointment. Masumi asked her doctor if she could be tested for the genetic mutation but was told that her insurance likely would not cover it due to no immediate history of cancer in her family. She suggested that Masumi ask her cousin the specific location of the mutation so that Masumi and her doctor could write letters to petition for the testing of that specific gene. Masumi felt like it was too much to go through considering that her chances of having a genetic mutation were pretty low. In addition, she was already dealing with an unknown autoimmune disease and a daughter who was dealing with end stage renal failure.

In early 2018, Masumi was under the care of a new gynecologist and mentioned the email she had received from her distant cousin. She was told that genetic testing had some a long way and was no longer as costly as it had been. Her gynecologist had partnered with Color and if Masumi wrote a check that day, she could have her blood drawn for a full panel of genetic testing, and have the results within a week. Masumi was told that no matter the outcome of the results, her doctor would require her to go into the office.

Masumi remembers the day she got the phone call that her test results were available. It was a beautiful day, perfectly blue skies and the sun was shining. She couldn’t believe that she had to go to the office to get the information when it was going to be negative, especially on such a nice day when she could be doing other things. Masumi’s doctor told her that the good news was that she did not have a BRCA1 mutation that she was worried about. The bad news was that she had tested positive for a BRCA2 mutation. Masumi was surprised but at the time did not make a distinction between the BRCA1 and 2 mutations. She thought this was still related to something on the paternal side of her family. It was not until she met with a genetic counselor that Masumi learned about the different between BRCA1 and BRCA2 and that the BRCA2 had come from the maternal side of her family.

In hindsight, it was a true blessing. Had her cousin not reached out, none of this would have ever crossed her mind and she would not have been tested. Had she been tested at the time of finding out that a BRCA1 mutation was present in the paternal side of her family, Masumi would have only been tested for that specific gene, which would have come back negative, and she would have never known about the BRCA2 mutation.

While she did not have a diagnosis of cancer, Masumi had to make decisions as though she does have a diagnosis. In terms of ovarian cancer screenings, there are no effective tools to truly identify it. The only medical recommendation is to have a hysterectomy and oophorectomy. Given the BRCA2 mutation, Masumi’s doctor has recommended that she undergo this surgery by the time she turns 45. Right now, she has pelvic ultrasounds every 6 months. By comparison, breast cancer screening is quite good. Once a genetic mutation is identified, individuals can choose to do increased screenings. Masumi was recommended to have a mammogram every 6 months and then an MRI at 6 months. For someone with a genetic mutation, there is not need to act right now because there is no diagnosis of cancer and just because someone has a positive mutation, it does not mean the person is sick.

At the time of her diagnosis, Masumi had undergone one routine mammogram, which was uneventful. Thinking that the screening would be the same, Masumi initially opted for the increase screenings. The screening was not easy for Masumi. She immediately ran into issues due to enlarged lymph nodes on the left side. She had a mammogram, following by an MRI, following by a biopsy, all of which were inconclusive. The tests were not done at the same time and there were several weeks between each of the diagnostic tests. During this time, Masumi experienced increased anxiety over the wait time. She got a good sense of what her life was going to look like for decades to come. For anyone with an identified gene mutation, if something does not look right on the screening, there will always be a recommendation for more testing. For Masumi, she did not want to live like this, it was not living.

Masumi decided that she wanted to have a bilateral mastectomy. At the time of her surgery, they had never come to a conclusion on the enlarged lymph nodes. If the screenings had been like her routine mammogram, she would have continued that route; however, she also recognizes that with screenings, the goal is to find the cancer. Masumi felt it was better to get ahead of any potential cancer diagnosis rather than wait for it to pop up. She elected to have immediate reconstruction at the time of her mastectomy. Masumi did not realize that other treatments for breast cancer can impact a patient’s options for reconstruction due to the potential impacts from chemotherapy or radiation. For her, if she was willing to have the mastectomy and elect for implants the same size as her breasts, she would be able to walk away not having to deal with all of the emotions that come with not have choices for reconstruction. In addition, it is a same day surgery and she got to keep her nipples. Masumi work up and did not feel like she had lost a piece of herself and did not feel mutilated, which is something that breast cancer survivors do not get to experience.

Previvors are in a unique position of not being sick but still being asked to make big decisions as if they are sick. In addition, there are no pink ribbons, there is a lack of awareness, a lack of support, and no fundraising that takes place like there is for survivors. Many people feel that cutting off one’s breasts would be a drastic decision when the person is otherwise healthy. Masumi decided that it was better for her to tell people after the fact. She did not need the extra noise of the world and the opinions. She felt it would be much easier to deal with after the surgery. She wanted to make the decision for herself and then tell people afterwards.

Masumi knows that she made the right decision for herself and her family. At the time of finding out that she had a BRCA2 mutation from the maternal side of her family, Masumi’s mom tested positive and had her ovaries removed. A year after her surgery, Masumi’s mom was diagnosed with breast cancer. Masumi now sees how different it is when having a bilateral mastectomy due to a breast cancer diagnosis. Even if she may have been a little uncertain when she had the surgery, she is now certain.

Regardless of whether someone is a previvor or a breast cancer survivor, recovering from a double mastectomy is hard. It is a struggle with the drains hanging out, trying to figure out how to wash your hair, and being able to do the normal activities you are used to doing. Masumi was startled to find out that she lost all of the feeling in her chest. Someone has to be mentally strong to undergo that kind of surgery. It is mentally exhausting.

During her recovery, Masumi really thought about mental wellness and thought about writing a book, which she has now published. Rise and Thrive is a guide for anyone dealing with a chronic illness. She was thinking about the book in terms of the autoimmune disease but then realized that she could write a book for anyone impacted by some kind of diagnosis that prevents them from living the kind of life that they want. It is really demoralizing when you are unable to do the things that you are used to doing. She provides a 40 day program of daily habits to help people move forward in the face of adversity.