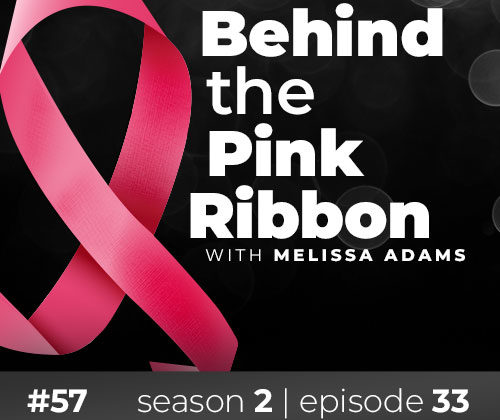 Lori Godfrey from Portland, Oregon joined us on the podcast. Lori was diagnosed with stage 3B invasive ductal carcinoma in 2007. She noticed changes in her breast, which were ultimately dismissed. Three months later, she felt a lump on her ribs, which she felt was a sign from God. Lori then consulted with a friend and was referred to a breast surgeon/oncologist, who confirmed a diagnosis of cancer. Lori discussed her course of treatment. and talks about finding the sport of dragon boating.

Lori Godfrey from Portland, Oregon was diagnosed in 2007 at the age of 49 with stage 3B invasive ductal carcinoma. She had undergone breast augmentation five years prior to finding her cancer. She noticed some changes in her breast including thickening along the surgical line. Lori made an appointment with her doctor, who did not seem to be overly concerned and related it to scar tissue. However, her doctor sent her for a diagnostic mammogram. She was told that something was going on in her lymph nodes. Though she felt as though there as a problem, the doctors felt otherwise.

Three months later, Lori was in Arizona with her parents and staying in the hospital with her ill father. Lori laid down on a cot to sleep. When she rolled over, she felt a lump on the side of her rib cage that she thought was odd. Her immediate reaction was that something was not right. She went into a discussion with God, acknowledged that something was not right, thanked him for the alert and attention, and promised to take care of it.

Upon returning home, which was in Texas at the time, Lori consulted with a plastic surgeon/friend. Her friend felt the lump but said nothing. She gave Lori a business card and had made an appointment for her to see a breast surgeon/oncologist. Lori did not look at the card and at the time, did not realize that her friend thought she might have cancer. When Lori walked into the waiting room, it was packed full of women who were wearing wigs and scarves. It dawned on her that her friend thought she might have cancer and that she was referred to a breast surgeon/oncologist.

Following the breast exam, Lori was immediately sent for a punch biopsy and within four hours, had the results. She underwent surgery the following day to remove the lump in the thickening of the scar line to be sent off for pathology.

Lori recalls that the experience was very traumatic. Everything happened so fast and she did not have time to think about it. When Lori got the results in the doctor’s office, she was told that the recommendation would be to have a bilateral mastectomy. Lori challenged the doctor on that recommendation. She and her husband left the office. As she was walking down the hallway to leave, she had to clutch onto her husband and she almost collapsed. This was as shook as she was throughout her entire journey.

Lori opted for a second opinion at NIH. As part of the second opinion, she was tested for the BRCA1/2 gene. Her results were negative. She was thankful to be negative and thought that she and her family were in the clear. However, the geneticist told her that while the results for this mutation were negative, she was not necessarily in the clear as there are other unknown mutations. Lori indicated that at this point, she would be elect to have the full panel of genetic testing done. She isn’t sure what more she would do if she tested positive for a genetic mutation.

Lori did a lot of research that resulted in her changing her mind about having a bilateral mastectomy. When she asked her doctor what she needed to do to give herself the best chance of survival, she was told that it would be to have the mastectomy. She read the Dr. Susan Love cancer book, used breastcancer.org to read through the section related to 3B, and searched the internet. She used the information from her doctor, as well as the experience of others to make the decision to move forward with the mastectomy. She realized that having a mastectomy would likely increase her chances of survival and in addition, she learned that many women who opt for a lumpectomy eventually elected to have a mastectomy.

Lori underwent the mastectomy with immediate reconstruction. It was discovered that she had several things going on- thickening of the scar and she also had cancer where her breast was connected to her sternum. The doctor had to remove the majority of her pectoral muscle in order to get clear margins. The cancer was a grade 3 and she had lymph node involvement. The cancer was triple positive. Lori underwent chemotherapy and was prescribed Herceptin for a year. She also had 34 rounds of radiation. If there was more to do, she would have done it. At this time, Lori is experiencing a lot of contracture of the breast. She needs to take action but is not doing so because she has a full commitment to her paddling life. At this time, she is uncertain if she will have them replaced and if she does, what that will be.

After her cancer diagnosis, Lori and her husband, Eric, returned to Portland, Oregon to be close to family. She and her husband made an agreement to take advantage of the outdoor activities that are available in Portland. One of the first events she attended was the Susan G. Komen walk. Lori was exploring the different booths that were set up and saw one brightly colored tent with a lot of women. She read through the information about this sport called dragon boating, which she had never heard of while living in Texas. Lori was not seeking a support group and was not interested in the support group aspect. She was ready to write a check then and there. She was told to try it out first and then she could pay her dues. She opted to pay anyways. During her first practice, she took to the sport like a duck. Lori and her husband are both highly involved in the sport. Lori has traveled to many other locations to paddle with other teams including a brand new team in Brail. Lori thought it was such a crazy notion that a group of women could train and stay committed to the sport of dragon boating, even though they did not have a boat and the regatta was the first time any of them were in a boat.