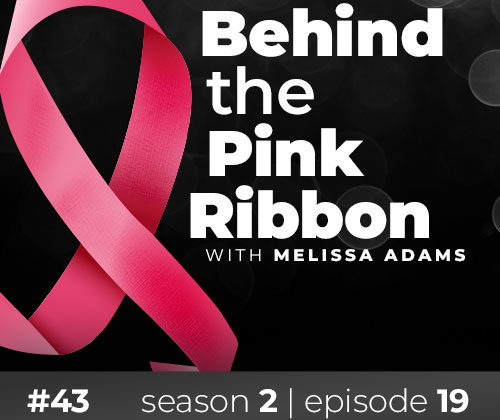 Lauri Leadley, a 27 year breast cancer survivor, joined us in the podcast studio to share her breast cancer journey. Lauri was initially diagnosed with Burkett’s lymphoma in the breast in 1992. She was 26 years old and 22 weeks pregnant with her 3rd baby at the time of her diagnosis. 23 years later, Lauri was diagnosed with stage 1 invasive ductal carcinoma. Lauri talks about dealing with a rare and aggressive cancer during pregnancy and then being diagnosed again with a different form of cancer.

In 1992, Lauri Leadley was 26 years old and 22 weeks pregnant when she was diagnosed with a rare and aggressive form of cancer in her breast, Burkett’s lymphoma. Lauri had a mass in her neck at approximately 18 weeks of pregnancy. It was removed and found to be an abscessed lymph node. She then found a lump in her breast. Lauri was sent to a general surgeon to have the lump removed. There were no concerns that it might be cancer but when the pathology report came back, she was told that she had a rare and aggressive form of cancer and needed treatment right away.

The diagnosis was devastating. Lauri was advised by several physician’s to terminate her pregnancy but she could not. She knew the sex of the baby and had already picked out his name- Connor. Lauri and her husband met with the medical director of lymphoma at the University of Arizona in Tucson. The medical director told Lauri’s husband that he should have their affairs together because she only had 6 weeks to live, maybe. While Lauri was sitting in the office at the time, the medical director did not even look at her.

The next day, Lauri had an appointment with Dr. Jack Cavalcant at Desert Oncology, now Ironwood Cancer Center. The doctor told Lauri and her husband that he had never treated a pregnant woman in the 2nd trimester but if she was willing to take the risk, he was willing to treat her. That Sunday, Lauri heard a sermon at church and recalls hearing the pastor say that you will never have joy in your life without taking risks. Lauri knew that she had to take the risk and opted to have chemotherapy while pregnant.

During chemotherapy, Lauri had to receive anti-nausea medication through IV before receiving the chemotherapy. Lauri had 9 rounds of the red devil, which is more than what they would offer now. Lauri was monitored closely and monitored the baby. On January 6th, the doctor told her that his lungs were developed and she could have him the following day, on Lauri’s birthday. Conner was born on Lauri’s 27th birthday weighing 6 lbs with a full head of hair. On her birthday, she underwent a c-section, had a baby, and also had a round of chemotherapy.

Lauri was told that if she made it to 5 years post diagnosis, she was considered to be cured from the disease. Lauri feels as though she owes her life and her son’s life to Dr. Jack Cavalcant. She never thought she would even see her daughter go to kindergarten and now she is a grandmother.

Lauri remained hyper vigilant with feeling her breasts for lumps. She was also getting mammograms but those mammograms were clean. She had previously undergone a hysterectomy and placed on hormone therapy due to her age. During the holidays, Lauri was not feeling well and was feeling like she needed to get off of her hormone pills as she was approaching 50.

In 2015, 23 years after her initial diagnosis, Lauri felt a lump in her breast. She immediately called her primary care physician and requested diagnostic testing. Her doctor’s office was somewhat hesitant in sending her but Lauri knew what she needed. Following a biopsy, Lauri received a phone call to tell her that she had invasive ductal carcinoma and that she needed to stop the hormone therapy immediately.

Lauri immediately developed a game plan and had seen 7 physicians in 5 days. While Lauri wanted a bilateral mastectomy, she was told that she would do fine with a lumpectomy and radiation but Lauri did not want radiation because she was aware that radiation can cause breast cancer and she has bad lungs. Lauri also was adamant about having a mastectomy. Lauri was told she was a possible candidate for immediate reconstruction and that she could have a nipple-sparing procedure but the plastic surgeon would not know until the time of surgery. Lauri feels lucky that she woke up with immediately reconstructed breasts and that her nipples were spared. She never experienced the loss of losing a breast like many other survivors.

Lauri’s core biopsy was wrong. She was initially told that the cancer was ER/PR positive but HER2 negative. However, a week after her bilateral mastectomy, her doctor told her that she was getting a questionable result regarding the HER2. As a result, Lauri underwent chemotherapy. In that time, Lauri had undergone genetic testing, which she paid for out of pocket. There was enough family history to suggest the there might be a genetic mutation. During her 2nd round of chemotherapy, Lauri’s doctor shared that they had found a genetic mutation.

Lauri tested positive for ataxia-telangiectasia mutation or ATM, which is a rare genetic mutation that is connected to pancreatic and breast cancer. Individuals with this mutation often experience health issues, including cancer and many do not live into adulthood. All of Lauri’s siblings are negative but both of her sons have tested positive for the mutation. The potential impact is that if her sons opt to have children, their partner would have to be tested for this mutation as it would create complications for the child if both parents happen to carry the mutation.

Lauri shared information about a test called the Breast Cancer Index that helps to determine the length of time needed for taking hormone blockers.