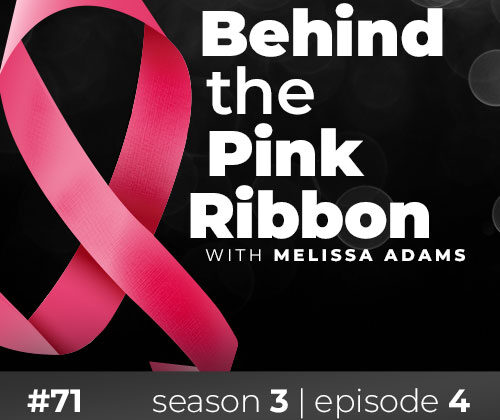 On this episode, Kim Schunn joined me on the podcast to share her story behind the pink ribbon. She was 45 when diagnosed with stage 3B inflammatory breast cancer. Kim shared her course of treatments and the complications that followed, in addition to being restaged to stage IV. Kim talked finding a passion for fly fishing through a retreat. Despite being on home hospice, Kim occupies her time with prepping for and going fly fishing. It serves as a reminder for her to live in the moment.

Kim Schunn was 45 at the time of her diagnosis of stage 3B inflammatory breast cancer in 2016. Kim’s mother and a close friend both battled early-stage breast cancer. As a result, she knew about doing self-exams and all the usual things to look for in terms of a lump and abnormalities, which she did not present with. Kim had undergone breast augmentation and a lift following childbirth about 10 years earlier. She started to notice that her left implant seemed to have shifted but thought this was because it was time for them to be replaced.

Within 9 months of noticing the initial change, Kim went to see the plastic surgeon that had done the surgery. During the exam, the surgeon took photos and noticed a dry patch of skin on the underside of Kim’s breast. Kim thought it was from working out and wearing a sports bra, and did not give it a second thought. Her plastic surgeon requested a mammogram and ultrasound before any surgery. Kim did not immediately have those tests done and had her plastic surgeon’s office not followed up on the status, she isn’t sure if she would have scheduled them.

Due to insurance protocols, Kim had to see her primary care doctor for a referral to have a mammogram and ultrasound. The Physician’s Assistant recognized the symptoms of inflammatory breast cancer. Kim was immediately sent to a breast surgeon and had a skin punch biopsy that confirmed the diagnosis. Kim had a hard time believing that things were not being exaggerated because she had never heard of inflammatory breast cancer nor had any of her family or friends. Kim did not have the mammogram and ultrasound, as they wanted to get her into treatment as soon as possible.

Kim’s treatment protocol was to begin immediate infusion chemotherapy followed by a radical mastectomy and then radiation. During her chemotherapy treatments, Kim had to undergo a mammogram, ultrasound, biopsy, MRI, and bone scan due to insurance protocols. At that time, they noticed lesions on her sternum but she continued to receive the stage 3 protocol because the stage 4 protocol is more for palliative care rather than curative care. Following chemo, in the spring of 2017, Kim underwent a bilateral mastectomy. She ended up in the emergency room for plural fusion, at which time the emergency oncologist recommended a biopsy of her sternum. At that time, Kim was restaged to stage IV. Kim started radiation but could not finish due to heart issues that landed her in the hospital three times.

Kim has been with MD Anderson for her initial treatments. By the time she had her mastectomy, she was $10,000 in debt. She moved in with family and took a leave of absence from work. Kim moved to Arizona Oncology and her oncologist there had a different mindset on the reality of Kim’s situation. There are not a lot of options and the outcomes are not typically positive. Reconstruction was at Kim’s discretion but it was not encouraged. She had to hold off on reconstruction for a year due to the radiation. During that time, Kim had oral chemo and injections, but there was no improvement. Tumors were growing and lesions were popping up throughout her body.

She decided that she was not happy with the mastectomy and opted to have reconstruction. She struggled with her self-image without breasts. She underwent 13 surgeries in 14 months in an attempt to reconstruct her breasts, many of the surgeries being fat grafting to try to even out her breasts. Kim finally decided that she was going to focus on the quality of her life rather than having perfect boobs. The irradiated tissue on the left side created many complications for reconstruction. In hindsight, Kim wishes that she would have had the confidence to go flat.

Things have changed greatly for Kim in the last year. She began visiting her daughter in Colorado to explore alternative treatments and then made the decision to relocate. Kim began in-home hospice care in December and is permitted to continue on the alternative treatments. The cancer is not reacting to the oral chemotherapy. She has the option of having a biopsy on the largest tumors to see if they have mutated and if they can be treated with immunotherapy or something else. Kim has opted not to do this. She feels that once at stage 4, cancer will travel where it is going to travel. In addition, if she qualified for treatments, she does not know that she can afford the treatments. In addition, she is unsure if she would enjoy the same quality of life. She is relatively healthy, is able to go outside, and can still be active.

Kim has always enjoyed the outdoors before finding out she has cancer. After attending a retreat with Casting for Recovery, Kim discovered a passion for fly fishing. She had truly intended on going only to connect with other Stage IV patients. However, by the end of the weekend, Kim was hooked on fly fishing. She took it very seriously and wanted to find out what it was for her individually so that she could help others.

Having to sit at home while battling a terminal illness without an outlet is very saddening and hopeless. It is important to have something to look forward to, to get out in nature, to get out in the sun, and to appreciate God’s grace at it’s finest. The physical aspects of fly fishing are great. It helps with lymphedema. It is also a great way to connect with others. It is a win-win for Kim as it helps her personally and she can share it with others who are also going through a trying time.