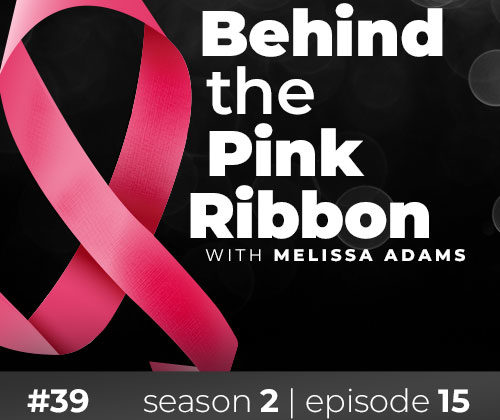 On this episode, Kim Carew, breast cancer survivor and the founder of Peace, Love, Tote, joined us on the podcast. Kim was diagnosed with Stage 2A triple negative breast cancer at the age of 53. Kim had always had anxiety that she would get cancer one day after losing a friend to cancer. She shared her experience with treatments and how she was unprepared for her first chemo treatment. Through her experience, she founded Peace, Love, Tote for other women going through chemotherapy.

Kim Carew was diagnosed with Stage 2A, triple negative breast cancer at the age of 53. Kim had a friend that died at a very young age from cancer. Her friend was a healthy person. She had just started a new job after college and was told that her symptoms were probably due to the stress from her job. In fact, it was pancreatic cancer that ultimately took her life. Kim explains that this experience led to her becoming a hypochondriac as an adult.

She was always very careful with getting regular check-ups. When she turned 40, she started getting routine mammograms. When she went in for her regular mammogram at 53, it was normal but it was indicated that she had a certain percentage of density in her breasts. Therefore, a baseline ultrasound was recommended. Kim recalls that during the baseline, she observed the technician doing measurements. Kim asked if it was a tumor. The radiologist told him that it was a 50/50 chance of being cancer. The mass had smooth edges and was 1.7 cm. She was told that if the mass was cancerous, it typically does not reach a lymph node until it is 2 cm. She was told that a lumpectomy would be recommended with radiation to follow.

Following a vacation, Kim had a biopsy. The doctor conducted the biopsy acknowledged Kim’s anxiety and decide to test the specimen right then. Kim was told that if the specimen from the biopsy floated when dropped into the cup, it was simply fatty tissue. However, if it dropped, it was probably something else. The specimen dropped and Kim knew that something was not right.

Kim’s family doctor referred her to an oncologist but the oncologist did not specialize in breast cancer. The oncologist assumed that the cancer would probably be estrogen positive but Kim was diagnosed with triple negative invasive ductal carcinoma. Kim has no family history of cancer.

A week after her diagnosis, Kim underwent surgery. At that time, 18 lymph nodes were removed. Kim decided that she wanted a triple negative expert. As a result, the had a consultation at City of Hope with a doctor that had done research on triple negative breast cancer. The doctor was shocked that so many lymph nodes had been removed. Kim shared that she is lucky that she has not experience lymphedema.

There is some research that suggests that triple negative breast cancer is linked to some kind of genetic mutation. Kim underwent genetic testing and was found to carry the PALB2 gene mutation. This mutation is closely linked to BRCA2.

Kim indicated that she had all of her treatments at City of Hope. She was prescribed 3 different chemotherapy drugs and underwent 38 rounds of radiation. Kim was offered MRIs every 6 months to be monitored but she continued to experience significant anxiety around the possible recurrence of cancer. At the recommendation of her doctor, she opted for a bilateral mastectomy. Since she had already undergone radiation, Kim was not a candidate for reconstruction with implants on the side that was radiated. She had a deep-flap procedure with an implant on the other side. Kim was offered a nipple-sparing mastectomy but decided to have the nippled removed as well. She had areola tattooing done by Jason Lewis from Botched who is now doing medical tattooing.

Following her experience with chemotherapy, Kim founded Peace, Love, Tote. She was unprepared and did not know what to do for chemotherapy. She showed up in jean, a sweatshirt, and flip flops. She was there for 6 hours and was unprepared. When Kim heard of anyone that had chemotherapy, she filled a bag with all of the items that she wished she had taken with her during her first chemotherapy treatment. A friend suggested that she start a foundation. Kim thought it would be just a local organization but she has received requests from other states. Kim wanted to be able to deliver the bags herself or have someone that is also a survivor deliver the bags.

The totes are free. A tote can be requested through the website at peacelovetote.org. Additional resources are also available on the website. Monetary donations are accepted.