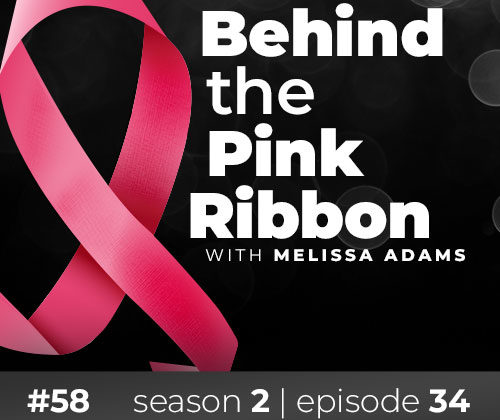 On this episode, my paternal cousin, Kim Afanador, shared her story. In 2017, Kim tested positive for the BRCA2 mutation. Kim was not told that a genetic mutation was discovered in the family until approximately 10 years after I was personally tested. She opens up about her feelings of having a hereditary cancer gene from a biological father that had denied her throughout her life. Kim also shares why she made the decision to have a bilateral mastectomy and how it has impacted her own family.

My paternal cousin, Kim Afanador, joined me on the podcast today. Kim found out that she is positive for a BRCA2 mutation in June 2017.

Our paternal cousin, Candace, reached out to Kim to tell her that she needed to be tested for the BRCA2 mutation. Candace sent Kim the results of her testing, as well as my information. Kim went for an exam with her gynecologist and shared a copy of the letters. It was recommended that she be tested for the BRCA mutation. Kim was told that she would have the results in several weeks. The results came faster than expected, about 10 days.

She recalls getting a phone call on a Friday from the lab in California where they conducted the test. She was surprised that the lab called to share the results rather than her doctor. She was shocked to learn that she was a positive carrier of the BRCA2 mutation. She was told at that time that the genetic mutation 100% came from the paternal side of her family. Kim called her doctor’s office on Monday. The nurse said that she was going to call Kim but the nurse said, “But we knew it was positive, didn’t we?”

Kim explained that she understood why the nurse might have said that given Kim’s past medical history but she did not expect to be positive. Kim had always had issues. In her 20’s, she had seen a doctor at the recommendation of a family member. The doctor conducted an exam and told Kim that she had breast cancer but had not done any additional diagnostic testing to confirm this diagnosis. When Kim saw her doctor, she was referred out for several different diagnostic tests including a mammogram, and was told that she did not have breast cancer. From there, she had a mammogram every 5-6 years until she turned 35 and then began having routine mammograms. She was often sent off for additional testing through an ultrasound because she had lumpy breasts but did not have cancerous lumps. While Kim felt it unnecessary to have the additional testing because they never found anything, she continued to have the testing completed.

Kim met her biological father at the age of 15 years old. My house was one of the first she visited after meeting her father. In the years to follow, Kim had an on and off-again relationship with her father. The first time she stayed the weekend with him, he forgot about her and did not come home. When she would answer the phone at his house, she often got questions about who she was and why she was there. Kim had been denied by not only her father but many of the paternal family members.

Kim expressed disappointment in the length of time it took for her to find out that there was a genetic mutation in the family but was not overly surprised. In 2007, Kim had heard that I was diagnosed with breast cancer but did not know the circumstances behind it and did not know about the genetic mutation. She finally found out in 2017. She would have liked to have this information before that time, not only for herself but also for her children. While she was disappointed, she was not overly surprised.

When Kim received the results of the testing, she was so angry. She recalls throwing her phone across the room and began screaming. She was angry because this mutation was passed down from someone who denied her, and a family that denied her. Kim called her maternal cousin and cried. Kim’s dad passed in 2012 but she wanted to go to his grave and yell at him, or even anyone in the family. She felt like all the feelings that she had over the years all came rushing back that day.

Kim saw her gynecologist and was referred out to a surgeon, geneticist, and an oncologist. With the known mutation and her previous health history, all of the doctors felt as though it was not a matter of if but when. Kim felt as though it was a ticking time bomb and that eventually, she would have a diagnosis of cancer. Her doctors left the decision up to Kim and she ultimately opted for a bilateral mastectomy. Part of that decision came from watching her mother pass away from lung cancer and realizing that any given moment could be her last. She did not want to put her family through that and wanted to do what she could to extend her life.

Kim opted to remain flat following her bilateral mastectomy. Kim is comfortable with her decision and is doing quite well with being flat but has had struggles with remaining flat. Her doctors were not on board with the decision but Kim held strong with her decision because she knew that her body could not handle the additional surgeries. She quite enjoys not having to wear a bra anymore.

Kim’s middle daughter was tested in July 2017 and was found to be positive in August 2017. Also, she tested positive for two other identified cancer genes. She has undergone a biopsy. At this time, she has not opted for surgery but Kim reminds her daughter to stay in contact with her doctors. Kim feels it is her job as a mother to do this and Kim does not want to lose any of her children.