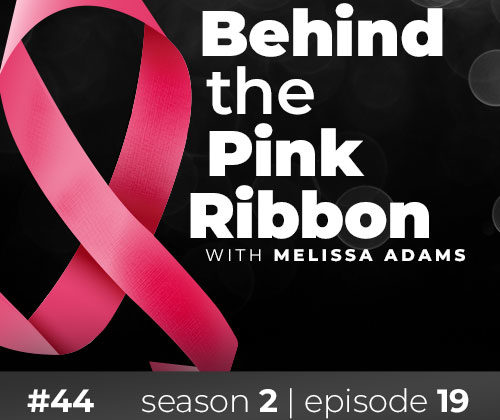 Karen Rowley, a 22-year breast cancer survivor from Orange Co. California, joined us on the podcast to share her survivor story. She was diagnosed at the age of 45 with invasive ductal carcinoma. After finding her lump, Karen went through several lumpectomies before having a single mastectomy followed by 6 rounds of radiation, While she explored her options, she decided to remain flat and became a model for mastectomy fitters.

Karen Rowley from Orange Co. California joined us on the podcast to share her survivor story. She is a 22 year breast cancer survivor, diagnosed in November 1998 at the age of 45 with invasive ductal carcinoma. Karen recalls having a previous mammogram that was negative. While in the shower, she put her hand under her breast and felt a lump the size of a walnut. Though it was during her menstrual cycle and knew it could potentially be related to that, she was proactive with her health and called her doctor for an appointment.

At that time, doctors conducted surgical biopsies. She also had an ultrasound. The doctor checked an area begin her nipple and also checked her lymph nodes. While she had a lump and it was growing rapidly, it had not yet invaded her lymph nodes.

Since it was around the holidays, Karen held off on having any surgeries until January. She was terrified of being put under for the surgery and thought for sure that she would die. With a 6 year old daughter and a 16 year old son, she did not want to take that chance around Christmas.

In January, Karen underwent several lumpectomies but each time was told that the margins were not clean and that she still had micro invasive cancer cells. Karen had a follow-up appointment with her surgeon. Her husband was not able to go with her so she took a friend. At that time, the surgeon told her that the margins again were not clear and that she would need to undergo a mastectomy. Karen recalls hitting the floor and yelling out.

In February, Karen underwent a single mastectomy. In 12 weeks, Karen had undergone 4 surgeries. She had opted to remain flat rather than have reconstruction. She had a consultation with three different plastic surgeons. One surgeon recommended that flap procedure while the other two recommended implants but told her that she would be be happy with them because they would not be able to match her healthy breast. Karen revisited the option of reconstruction at the age of 50 and again at 55 but has continued to remain flat.

Karen underwent 6 rounds of chemotherapy using CMF. Her doctor presented it to her as kind of like an insurance policy. She felt like if there was cancer anywhere in her body, she needed to take care of it for herself and her family. She has experienced a number of side effects from the chemotherapy including having dental work done, osteoporosis, and memory loss. Though the cancer was estrogen positive, she decided not to do hormone therapy. She felt like she had already been through enough and was tired; she did not want to do anymore treatments.

Karen was tested for the BRCA1/2 mutation 12 years ago, which came back negative. She does not know her family history because she is adopted but feels that her cancer may have been environmental. She worked at the University of California- Irvine and drove through the agricultural fields. Back then there was a lot a of spraying of pesticides. She also feels that stress may have been a factor.

Karen became a topless model 6 months out of surgery for companies that make mastectomy products. She remembers the first time she did it and how scared and vulnerable she felt. She realized that many people had not ever seen a breast cancer patient, a mastectomy, or a flat chest with a scar. She repeatedly told herself that she was an actress playing a role to help her get through the first few times. She found this as a way of giving back.

Karen’s goal is life is to positively impact others, to give hope and encouragement to others going through breast cancer. She feels that is she can be someone that others can reach out to and give hope, then she is fulfilling her life.

Her husband played a crucial role in her recovery from breast cancer. He provided her with humor and acceptance. She is grateful and appreciative for him.

Karen reminds you to appreciate yourself for who you are. She shared that your breasts do not define you; breasts are a blob of fat with a single purpose and they are not what make you who you are.

Got through it by telling herself that she was acting. Was scary and vulnerable the first few times. Wouldn’t show her husband for the first 2 weeks following mastectomy. Husband was very supportive and told her he did not marry her for her breasts. Whether you explant, a double mastectomy, whether you have a single, whether you have a lumpectomy, whatever it is, that doesn’t change who you are as a person.