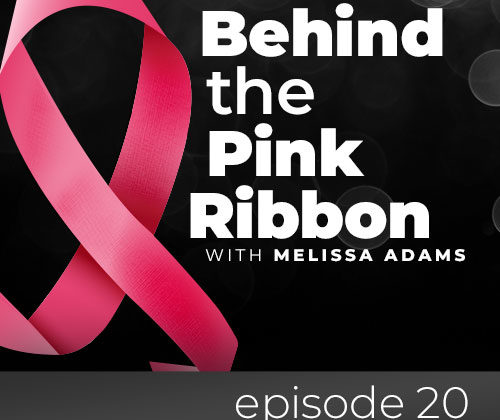 On this episode, Julie Caputo joined us on the podcast. She was diagnosed with Stage 2B invasive lobular cancer at the age of 49. Julie shared that a pain in her left side under her breast that was not even connected to the cancer was what led her to be examined in the first place. She also talks about her treatments, her support system, and how having unrelenting positivity has been a key factor in her road to recovery.

Julie Caputo joined us on the podcast today. In March 2019, Julie was diagnosed with Stage 2B invasive lobular cancer at the age of 49 years.

Julie noted that with lobular cancer, most people do not feel anything like a lump as it grows in strands and is not encapsulated. As a result it cannot be detected through a self-breast exam.

Julie began experiencing pain in her rib under her left breast. She thought it was related to her current implants getting old. When she shared her concerns with a coworker, she was encouraged to follow up on the pain but also to have a mammogram.

Julie followed up with her doctor who did a breast exam but did not feel anything. However, her doctor suggested that she have a mammogram but nothing was found on the 3D mammogram either. The doctor then recommended an ultrasound, which is finally what detected something suspicious. Interestingly, the pain that Julie was experiencing in her left rib was not related to the area where they found something and had disappeared altogether.

Following the ultrasound, Julie was sent for an MRI of both breasts, which also had indicated something suspicious. She was then sent for a biopsy. At this time, there had been no mention of possible breast cancer. Prior to having the biopsy, the doctor sat down with her, held her hand, and said, “so you know why you are here?” Julie thought she knew but the doctor explained to her that there was a chance that she had breast cancer.

Julie wasn’t prepared to hear that. She had gone to the biopsy on her own. Her husband and son were out of the country and she did not think that she would need to have anyone else come along with her to the appointment. Julie recalled getting in her car and driving herself home while in tears. She felt so alone and was numb. Had someone told her that there was a chance that she might have breast cancer, she would have taken someone to the appointment with her.

Julie stressed the importance of being aware of your breasts- knowing what they looks like and feel like. There is not much information on this kind of cancer and it is not always picked up on mammography. As a result, those diagnosed with lobular cancer tend to be at a higher stage when it is finally diagnosed. There are current research studies but at this time, lobular cancer is treated the same way as ductal carcinoma.

Her OBGyn had referred Julie to a breast surgeon. When she met with the breast surgeon for her first appointment, Julie was unprepared for all of the information she would receive. She had taken her coworker with her to also hear what the doctor shared. Julie heard bits and pieces of what the doctor said but recalled hearing so many different options for treatment. She began crying and cried the whole way home.

Though they had a treatment plan in place, Julie shared that nothing went quite the way that the doctors said it would go. In April 2019, Julie underwent a nipple-sparing bilateral mastectomy. Based on diagnostic testing, she was considered to be stage 1A but following her surgery, the cancer was ungraded to stage 2B as she had lymph node involvement. At the time of her surgery, Julie experienced a blood clot. She bled for 10 hours and had passed out.

She completed 8 weeks of chemo therapy and is in the middle of completing her treatment with Taxol. She has experienced low red blood count, which resulted in a transfusion. She also also had low white blood count and was unable to complete chemo therapy treatments. When finished with chemotherapy, she will undergo radiation, hyperbaric treatment, and have a hysterectomy. She will also be prescribed an estrogen blocker, as she is ER/PR positive.

Julie shared that there is no history of breast cancer in her family. She wants to do all that she can to reduce her risk of recurrence.

Julie found support online. Her family had told her to stay off the computer but she felt so alone and was seeking information. She shared some of the good nuggets of information she received for specific treatments. For radiation, some suggestions including using lavender, aloe, and avocado oil. Horse tail vitamins were recommended to promote hair growth. Vitamin B complex and glutamine were suggested to reduce or prevent neuropathy.

At the oncology office where Julie receives her chemotherapy, they use the saying “Unrelenting Positivity”. Julie uses this as a reminder in her journey.

Julie has found support in her faith. She recognizes that she will never be the same person again but her faith has carried her through. She has a great support system of friends and family that have relied around her.

Julie shared that a diagnosis of cancer is similar to the loss of a loved one in that everyone shows up at the beginning. People send gifts and show their support, which serves as a distraction, but then those people go back to their own lives. This is when the grief starts to set in. The persona diagnosed with cancer or that lost a loved one is still facing that struggle. Julie wants listeners to know that someone may need support longer than expected. It is an emotional rollercoaster and it is nice just to have someone check in.