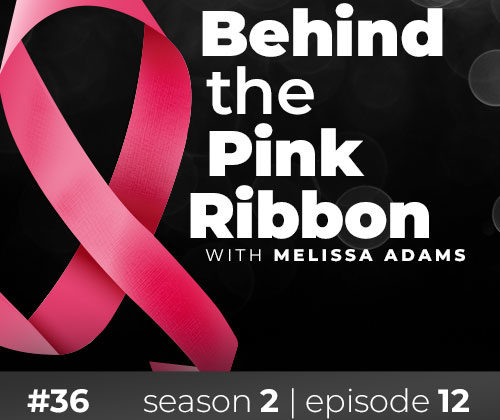 Jennifer Keyser :
My Daughter, My Rock

Jennifer Keyser from Gilbert, AZ joined us in the podcast studio to share her story behind the pink ribbon. Jennifer talks about feeling a heaviness in her chest. She googled how to do a self-breast exam and found hard tissue in her breast. Her doctor told her not to worry and Jennifer didn’t but as time passed, she began experiencing pain. She was diagnosed with triple-positive inflammatory breast cancer at the age of 31. She talks about her treatment, her daughter, and her support system.

Jennifer Keyser was 31 was she was diagnosed with stage 3B triple positive inflammatory breast cancer. She felt a heaviness in her breast that did not seem right. She googled how to do a self breast exam. Jennifer recalls feeling hard tissue. She scheduled an appointment with her doctor a week later but was told that she should not worry as it was probably just dense breast tissue. However, her doctor wanted to rule it out just in case.

Jennifer wasn’t worried about it. She scheduled an appointment for a few weeks later when it was convenient for her but in that time, she began to experience pain. She called her doctor and was scheduled for an appointment the next day. She had a mammogram followed by an ultrasound and then a biopsy. The mammogram identified 3 masses in her breast. Jennifer’s doctor called her a few hours later and told her that she had cancer and it was aggressive. Her lymph nodes were enlarged and the right breast was also starting to become enlarged.

Jennifer was diagnosed with cancer on a Friday and by Monday was being scheduled to have a port put in. She had been referred to a surgeon at MD Anderson who was very knowledgeable about inflammatory breast cancer. IBC is a rare cancer found in only approximately 1-5% of the population and more often in young women. Jennifer indicated that it was found at the earlier stage possible because staging for IBC is stage 3B, stage 3C, and stage 4.

Jennifer went through 4 rounds of chemotherapy using Adriamycn and Cyclophosphamide and was to undergo 12 rounds of Taxol but then her oncologist recommended TCHP (Taxotere+Carboplatin+Herceptin+Perjeta) for 7 rounds with a heavy dosage. Jennifer received chemotherapy every 3 weeks. She developed neuropathy in her hip and was very fatigued. Jennifer completed 5 of the recommended 7 doses f chemotherapy. Once the chemo was completed, all of her symptoms went away.

Following her mastectomy, Jennifer underwent 6 rounds of radiation. The radiation protocol for patients with inflammatory breast cancer is different from traditional radiation. The therapy targeted the skin, chest wall, and lymph nodes. The impact of the radiation her skin came pretty quickly. She experienced fatigue and burning of the skin.

Given that the cancer is triple positive, Jennifer is prescribed Herceptin, Perjeta, a shot of Zoladex, and Anastrozole. Jennifer had genetic testing but results came back negative. However, he daughter will begin screenings at the age of 21.

Jennifer’s daughter is currently 8 years old and at first did not understand. It was hard for Jennifer to say the word “cancer” around her daughter. Jennifer reached out to a therapist who helped guide her through talking to her daughter about her diagnosis. Jennifer read the recommended book but was crying as she read it. Her daughter was the one telling Jennifer that it would be okay. Jennifer said that her daughter was her rock. Jennifer has written down everything about her journey in detail and plans to create a book for daughter and to serve as a reminder of her own experience. Jennifer wants her daughter to be able to be okay if she faces anything hard.

Jennifer’s parents moved from Eugene, Oregon to Gilbert, Arizona and have been there to support her when her husband has to go to work. They have provided support with her daughter as well. In addition to her parents, husband, and daughter, Jennifer has accessed support systems online. She is part of Boobie Buddies and some Inflammatory Breast Cancer groups. She has reached out to several nonprofits such as Don’t Be a Chump, Check for a Lump. She has been invited to several events and this has helped her emotionally. In addition, she has met some new friends in the process.

Jennifer recommends that those newly diagnosed reach out to the community, do your own research, get a second opinion, and advocate for yourself.