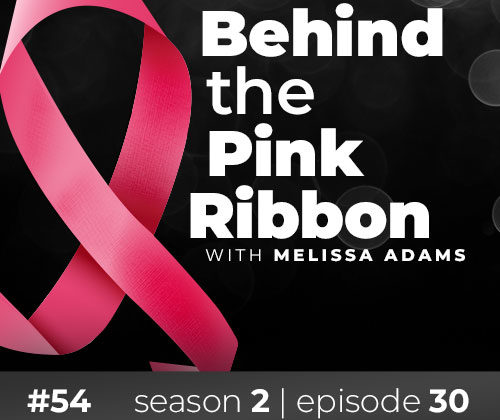 Jen Rozenbaum from New York joined us on the podcast. Jen is a boudoir photographer, the podcast host of Shamelessly Feminine, and a breast cancer survivor. In July 2017, Jen was diagnosed at the age of 41 with stage 2 invasive lobular cancer. Jen shares her story behind the pink ribbon. She also talks about struggling through the reconstructive process, not just physically but emotionally and spiritually as well.

Jen Rozenbaum was 41 in July 2017 when she was diagnosed with stage 2 invasive lobular cancer. At the age of 40, Jen had her first mammogram. At that time, calcifications were noted in her left breast and she was told to return in 6 months. She returned and no changes were noted with the calcifications but there was a cyst on her right breast. She was again told to return in 6 months. While taking a selfie, Jen noticed a weird shadow. She felt something like a swollen muscle. Her husband also said it felt like a swollen muscle. Though Jen’s husband told her that she should see a doctor, she already had an appointment scheduled. In addition, she did not have a family history of breast cancer and it was not painful. She thought it was related to her working out and losing weight, and thought that it would just come and go.

Jen returned for her scheduled appointment in July 2017. She was almost ready to leave when she asked the sonogram technician to look at the spot where she had found the lump. The technician was not able to see it until she pressed really hard and finally saw something black show up on the screen. Jen was immediately sent for a biopsy. Following the biopsy, the doctor sat Jen down and told her that it was likely cancer. She was told she would have definitive results in 2 days.

Two days later, Jen was diagnosed with invasive lobular carcinoma. She had a 7 cm mass and another 3 cm mass under the first mass. Neither of which were caught by mammogram or sonogram. The cancer had not spread into her lymph nodes. The cancer was found to be estrogen positive, HER2 negative.

Jen underwent a bilateral mastectomy two weeks after her diagnosis. She had expanders put in followed by implants. She scored 19 on the Oncotype testing and was prescribed 8 rounds of chemotherapy. She did not have to undergo radiation. Jen was determined to finish her treatments in 2017 and start fresh in 2018.

Jen had a revision to her reconstruction in November 2019. She was not happy with the reconstruction; they did not looks good or feel good. She recalls that her plastic surgeon was a jerk about her wanting to redo her reconstruction. While everyone assured her that she looked fine, she did not feel that way. Jen sought out a new plastic surgeon, who upon seeing her reconstruction, indicated that it was all wrong. One implant sat lower than the other. Jen has had fat grafting done as part of the recent reconstructive process and has more scheduled in September 2020 to raise her implants. The cancer was very high in her breast, resulting in the surgeon taking all the breast tissue up to her collar bone. It has been a challenge to try to fill that space.

For Jen, she felt like she looked ridiculous in a bathing suit and a bra. She had a hard time buying certain clothing. She felt as though people may have been looking at her and was nervous about what others were going to think. There are also times when she has had serious boob envy and there are days when she just wants to have normal boobs. Jen photographs half naked women as her career. She is also faced with women who are complete and whole while she struggles with dealing with her own body. Sometimes, just waking up in the morning and finding an outfit to wear is a challenge. She thinks about cancer every day because it has impacted every aspect of her life.

Jen went public with her breast cancer journey because she has a pretty large following of women in the photography industry. She decided that it was a gift given by the universe to help others. She wanted other women to feel feminine and beautiful. She shared videos on YouTube throughout her journey. Jen struggled with finding support. Everywhere she turned, the information she received was damaging and scary. She did not want to take away from any of that as a reality of this disease but she had to protect herself.

While Jen had hoped that 2018 would be better than 2017, she felt it was worse. She felt as though her life was in complete shambles. She felt like she had to tell everyone that she was good and if she didn’t say she would good, people would not understand. There is this idea that cancer survivor should be grateful to just be alive but there is a difference between being alive and feeling alive. Jen did not feel alive in 2018 and some of 2019. She did not feel well emotionally, physically, or spiritually. Jen feels like there is no positive place for women to go for support in putting their lives back together after cancer. It is like once you are finished with cancer, you are kicked out. Jen equates having cancer to a tornado. While we may recognize the pieces of our lives, the pieces are all over the place and don’t fit back together like it was.

Jen is in the process of writing a book and working up a program to help other reconstruct their lives after cancer. Others expect cancer survivors to act the same way, look the same, and do the same things. Everyone expects survivors to go back to their live pre-cancer but that doesn’t happen.