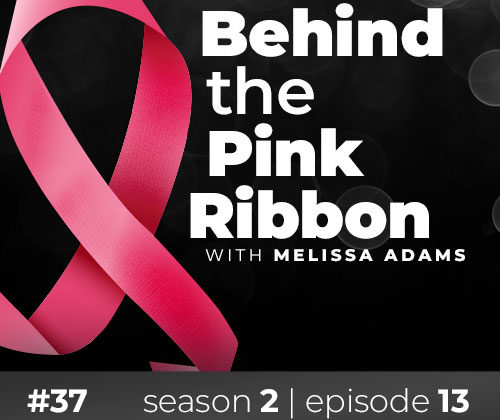 Harvey Singer and Vicki Singer Wolf joined us on the show to share their stories behind the pink ribbon. Vicki was first diagnosed with ductal carcinoma in-situ at the age of 35. Following her third diagnosis, Vicki tested and found positive for the BRCA2 mutation. In 2008, Harvey experienced a sharp pain in his breast and was subsequently diagnosed with breast cancer as well. As a male breast cancer survivor in a very pink world, Harvey struggled to find information and support. Together, they co-founded HIS Breast Cancer.

Harvey Singer and Vicki Singer Wolf, brother and sister, and cofounders of HIS Breast Cancer joined us on the podcast. They have a significant family history of breast cancer. Their mother and aunt were diagnosed with breast cancer in the 70’s.

Given the significant family history, Vicki started having mammograms at the age of 35. In 1995 at the age of 37 during a routine mammogram, Vicki was diagnosed with Ductal Carcinoma In-Situ (DCIS) in her right breast and underwent a lumpectomy. In 1997 at the age of 39, Vicki had another routine mammogram that showed DCIS in the same breast but it was considered a new cancer. Vicki had another lumpectomy and had mammograms and breast MRIs every 6 months to follow. In 2005 at the age of 47, Vicki was diagnosed with invasive ductal carcinoma in the same breast. Vicki again opted for a lumpectomy as there was no lymph node involvement. She underwent 6.5 weeks of radiation and was prescribed Tamoxifen.

During her third diagnosis, Vicki learned about the BRCA gene and had the genetic testing. She was found to be positive for the BRCA2 mutation. Given the increased risk for ovarian and other cancers, Vicki opted to have a prophylactic hysterectomy. Vicki shared the testing results with both of her brothers and her three sons.

Vicki thought that she was well ahead of the game but in November 2016, Vicki was diagnosed again. She had her 6 month mammogram and MRI that did not detect anything suspicious but was sent back for another MRI, which confirmed cancer. Vicki knew that if the cancer returned that she would undergo a bilateral mastectomy. However, Vicki shares that she was hesitant because she felt like her body wanted to make cancer and if she had her breasts removed, where would it go and where would they look for it. She underwent the bilateral mastectomy followed by chemotherapy and is not prescribed Arimidex.

In 2008, approximately 4 months after Vicki had shared her results of the BRCA testing, Harvey had a sharp pain that went from his nipple up to his ear after being bear hugged by a friend. He did not ever think that he would get breast cancer so he had not undergone the genetic testing. He followed up with his doctor who found something under his nipple and was sent for a mammogram and ultrasound. He was scheduled the following week for a biopsy. Harvey knew that he was going to be a part of the less than 1% of men who are diagnosed with Brest cancer. Harvey called Vicki to discuss options and next steps. He found a breast surgeon on his own. He opted to undergo a unilateral mastectomy on his left breast. While he was offered to have a bilateral mastectomy, he was not ready to make that decision at that time. Given that the recurrence level is so low, he thought it would be fine. In retrospect, he would have had the bilateral mastectomy. He continues to be monitored through breast MRIs and mammograms. Eighteen months after his breast cancer diagnosis, Harvey was diagnosed with prostate cancer. In his opinion, he feels as though he actually had prostate cancer first as his PSA scores kept getting higher. He underwent 3.5 months of chemotherapy. Following his own diagnoses, Harvey was tested for the BRCA2 mutation because he wanted to know for his boys, as well as his nephews.

Harvey immediately felt alone. Harvey struggled through many sleepless nights during chemotherapy and when he researched information related to male breast cancer, he could not find anything. He and Vicki decided that together, they needed to make a change. They wanted to create a resource for other men to increase awareness, removed the stigma, and to provide information. As a result, they founded HIS breast cancer.

Vicki felt like she and Harvey were chosen to have breast cancer because they could do something different to change it and help educate others. Even medical professionals are unaware that men can get breast cancer. They wanted to create a place where individuals could find information and a roadmap of how to navigate the system. They also wanted to provide information on genetic testing. Vicki and Harvey hope to add some blue to the pink ribbon because using a pink ribbon to represent breast cancer only further alienates men. They have advocated for changing of medical forms to be completed when going in for an assessment. There is no reason a man should have to complete a form that asks about their last period or the number of pregnancies.

HIS Breast Cancer is run solely through the support of volunteers and the organization is 100% nonprofit. All proceeds support the mission of the organization and go back into the breast cancer community. HIS Breast cancer has helped to fund the movie Pink and Blue: Hereditary: Colors of Hereditary Cancer. Harvey has written a book- Sir, you have breast cancer. Vicki blogs each month. They include stories of other male survivors on their website. HIS Breast Cancer also advocates to help get more clinical trials to include men. The talk of male breast cancer is starting to become more of a whisper but it needs to pick up more momentum. Currently, doctors are treating men the only way they know how to treat breast cancer, which is the same way they treat women. They don’t know as there have not been enough clinical trials on male breast cancer.

HIS Breast Cancer has celebrated 10 years. There are many ways to support the organization such as making a purchase from their online shop, buying Harvey’s book, and making a monetary donation. Anyone interested in volunteering can send an email for more information.

The most important thing for men is to be aware that they can get breast cancer. If you feel something, don’t ignore it. Information on how to do a self-breast exam is available on the website. For men, breast cancer is usually diagnosed much later because they don’t get checked and have a tendency to ignore things. Men can ask their doctor to do a breast exam as well.