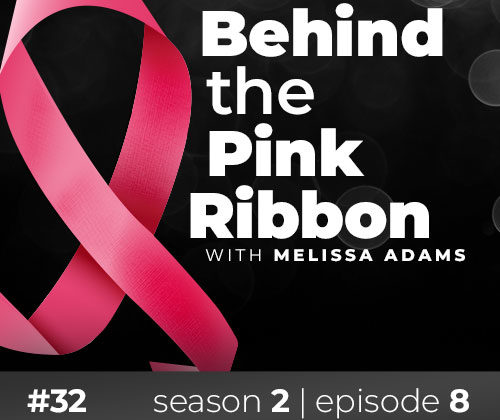 On this episode, Gina McDonough, a 10-year breast cancer survivor and gym owner, joined us in the podcast studio to share her journey through breast cancer. Gina talked about her breast cancer treatments. She openly shared her struggle with falling to a deep depression following cancer, which led to self-medicating with alcohol for approximately 3 years. Gina talked about getting clean for her family and fulfilling her lifelong dream of opening her own fitness studio.

Gina McDonough was diagnosed with stage 1 tubular carcinoma at the age of 46 in 2008. She was always very health conscious and went in for her regular mammogram. She was asked to return for some follow-up testing and was sent for further diagnostic testing. Tubular cancer is a rare type of breast cancer, impacting approximately 5-10% of the population. Often, the cancer does not present as a lump that can be found through mammography but rather appears like a tentacle.

The cancer was located close to her chest wall, resulting in chemotherapy prior to undergoing surgery. It was recommended that she have a lumpectomy but after consideration, opted for a single mastectomy. However, after some additional consideration, she decided to have a bilateral mastectomy with delayed reconstruction.

Following the mastectomy, Gina underwent radiation and was also prescribed Tamoxifen. She only took the Tamoxifen for a short time and then opted to stop taking it because of the side effects. The chemotherapy and Tamoxifen impacted her joints and bones and she gained 20 lbs, which impacted her quality of life and put her into a depression.

Five years post-radiation, Gina had to undergo another surgery due to the impact of the radiation on the implant. She opted for a latissimus flap procedure. While this had impacted her physically, she has learned to do the same things she used to do in terms of training, but how to do them differently.

Given the impact of the chemotherapy and the side effects of the Tamoxifen, Gina fell into a deep depression. She drank every night to herself to sleep. The alcohol took away her feelings. She struggled with self-medication for three years before realizing that she was killing herself and destroying her family. Gina checked herself into recovery and following a relapse, she began attended Alcoholics Anonymous every single day for a year.

Gina found the strength to get clean because she wanted to be here for her family, her kids, and her grand babies. She wanted to set an example for other women that if she can get clean, they can too. Gina believes that no one can change but yourself. While family and friends can support you, the only person that can make the decision to get clean is you.

After getting clean, Gina found a nutritional system that fueled her body with good stuff and became a vessel for her to fulfill her lifelong dream of opening her own fitness studio. She works with all women over the age of 50 years old. Many of the women are breast cancer survivors and Gina tailors their fitness program to their specific needs. Gina describes her studio as much more than a gym, it is also kind of like a support group and all of the warm support and encourage one another.

Her studio is called Personally Fit for You and is located at 4210 E Main Street in Mesa, Arizona.