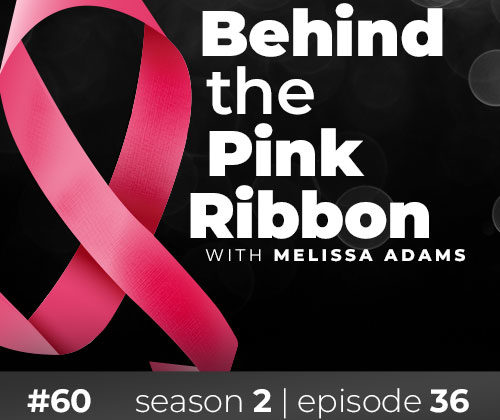 Dr. Leslie Cole, a board-certified physician in internal medicine, as well as addiction medicine, is my guest on today’s podcast. She shares her story behind the pink ribbon. Dr. Cole openly shared her struggles with anxiety and developing an irrational fear that her husband would die of cancer. While she had tools that she previously used, those proved to be ineffective. Dr. Cole attended a class for Emotion Freedom Technique at her local Cancer Support Community, which completely shifted her emotions. She eventually became certified herself and now provides this technique to other survivors.

Dr. Leslie Cole is a board-certified physician in internal medicine and addiction medicine. She was diagnosed in January 2017 at the age of 47 with stage 2, triple positive invasive ductal carcinoma. When she was 40, Dr. Cole’s mother had been diagnosed with lobular carcinoma in situ in her 70’s and was closely followed. In 2016, her younger sister was diagnosed with ductal carcinoma in situ that was widespread. Her sister opted for a bilateral mastectomy. Her sister was also tested for the BRCA mutation but was found to be negative. Dr. Cole began experiencing anxiety of developing breast cancer. She found something in her left breast and immediately went to her doctor. Through a series of diagnostic tests, Dr. Cole was told she had fibrocystic tissue, much to her relief.

In July of 2016, she found a pea size knot in the armpit area on her right side. Since she had just been assessed and found to have fibrocystic breasts, she talked herself out of being assessed and assured herself that it would be fine until her next follow-up appointment in December 2016. At her appointment, she told her gyne that she had found a lump and through exam, her doctor could barely feel it but sent her for diagnostic testing. Dr. Cole recalls that following the ultrasound, the radiologist came into the room and told her it was a good thing that they found the lump early and that she would need a biopsy. Dr. Cole had a biopsy and the following day received the phone call at her practice to tell her that she had breast cancer. She remembers crying and telling her office manager that all of her scheduled appointments would have to be rescheduled. Her husband picked her up from work and she cried that whole way home. Dr. Cole found comfort from her sister in law who was a nurse and had also battled breast cancer.

Dr. Cole opted to have a bilateral mastectomy with reconstruction with silicone implants. She underwent chemotherapy after surgery. She lost her hair, lost weight, and felt like she was losing her mind. She shared that it was the hardest thing she had ever gone through in her life. While radiation therapy was not initially recommended, a sentinel lymph node biopsy done at the time of surgery indicated the presence of cancer in her lymph nodes. Rather than having a full axillary dissection or radiation, she opted for aggressive chemotherapy.

Dr. Cole thought that she could handle cancer in her normal ways of handling stress. Before cancer, she followed a morning routine of journaling her thoughts and feelings, setting up her day with goals/plans, and reading scripture. Dealing with cancer made her struggle with her faith. Dr. Cole dealt with things mindfully in that whatever she felt, she allowed herself to feel until it was gone. She allowed her self to feel the feeling of being okay to die because she thought she was going to die. In talking with a friend, she experienced an ah-ha moment and realized that she did not want to die and that she did not want to get overly familiar with the feeling of death. Dr. Cole thought about a few scriptures that helped her to realize that we are meant to live and we are not meant to be acquainted with death.

Dr. Cole began a new type of journaling as part of her morning routine. On one page, she would write her requests, everything that she needed and on the opposite page, she would write everything that she was thankful for. It provided a sense of unburdening herself. However, this was not enough. She continued to face anxiety and began projecting it onto her husband. She had developed a fear that he would die from cancer. Dr. Cole found additional support through her local chapter of Cancer Support Community. She participated in a support group and attended classes. One of the classes she attended was on Tapping Out Stress with a tapping coach. On that particular day, Dr. Cole was a 10/10 for anxiety. She volunteered to be the subject for demonstration. Over the next hour, the coach tapped with the attendees and in that hour, Dr. Cole’s anxiety dropped to a zero. She felt completely calm and peace. She sought out more information and support to help her deal with her emotions.

Emotional Freedom technique uses meridian point tapping. Gary Craig discovered that tapping on acupressure points calms the amygdala and the parasympathetic nervous system. Studies have shown that there is a 43% drop in cortisol levels after tapping. There are approximately 50 studies that would show a statically significant difference following tapping. EFT made such a difference in Dr. Cole’s life that she decided to become certified. She has since opened an online practice to help others tap down anxiety. Also, she helps to support those suffering from weight gain and addition.

She is currently offering free tapping sessions to help people become more aware of EFT. Anyone interested can reach her at info@drlesliecole.com for more information.