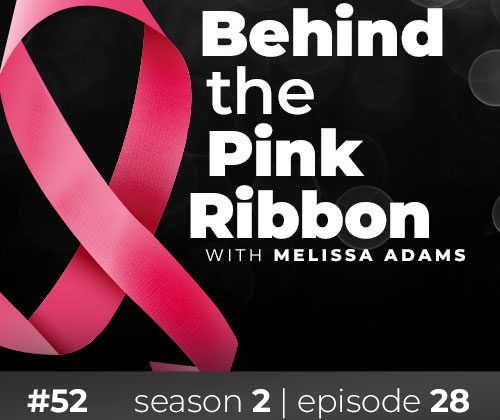 Christy Avila, founder of International Flat Day and current Vice President of Not Putting on A Shirt, joined us on the podcast. She was diagnosed with stage 3C invasive ductal carcinoma at the age of 38. Christy talked about her treatments, making the hard decision to not have a second child, reconstructive complications, deciding to explant, and how she is helping others.

Christy Avila the founder of International Flat Day and current Vice President of Not Putting on A Shirt joined us on the podcast. She was diagnosed with breast cancer after going in for a check-up with her mid-wife, as she and her husband were exploring a second pregnancy. Christy talked about her treatments, the hard decision to not have a second child, realizing that she didn’t know all the reconstruction options, explanting, and how she is now helping others through her own experience.

Show Notes:
Christy Avila was diagnosed with stage 3C invasive ductal carcinoma in August 2013 at the age of 38. She and her husband have a son who was approaching 3 years old at the time. They wanted to explore having a second child. Christy went to her mid-wife for a check-up. The mid-wife recommended a mammogram but she also felt a lump in Christy’s breast.

Christy recalled that her husband held felt a lump in her breast a year prior and remembers the look of terror in his eyes. A friend had experienced a blocked milk duct and Christy had associated her lump with that because she was still breast feeding at the time. She had mentioned it to her sister and a few friends but Christy associated it with a block milk duct. She felt like her breast was engorged and had not noticed any growth.

Christy had a mammogram following by an ultrasound. When the doctor came into exam her, things unfolded very quickly. She recalled the look on his face when he felt the lump her breast. It was the same look her husband had a year earlier. She asked him point blank if he thought it was cancer. The doctor told her that were so many things that mimic cancer that he could not say.

Within a week or 2, Christy had a biopsy. The suspicious lump was on her right side; she underwent 4 biopsies on her right breast and 2 on her left breast. The biopsy was a 6-hour long process. Christy and her husband went in to the doctor’s office to hear the results of the biopsy. She was told that it was a very rare cancer and had been sent off to UCSF for further testing because the pathologist could not identify it. Ultimately, USCF indicated that it was a highly unusual case but agreed that it was ER/PR positive and HER2 negative. Christy shared that looking back now, it is easier to ask ourselves why we didn’t ask questions, seek more information, or do something differently.

Several family members have had cancer. Three of her four uncles on her maternal side were diagnosed with cancer. Her mother and three of her sisters were diagnosed with cancer. Her mother was diagnosed with ovarian cancer at the age of 54. While Christy had undone genetic testing, it revealed to evidence of a genetic mutation. None of her family members have tested positive for any of the known gene mutations either. Her oncologist told her that it is likely genetic but the specific marker has not yet been discovered.

Christy knew immediately that she had planned to undergo a mastectomy. She felt like she did not have adequate information regarding implants. She underwent immediate reconstruction with tissue expanders. She had to wait a year before having her exchange surgery. She underwent radiation through the summer and in September had a hysterectomy and exchange to implants.

At the time of her diagnosis, Christy was thought to have stage 4 breast cancer. A scan showed something in her liver that suggested the cancer had metastasized. Her mother had just passed away from ovarian cancer and given the strong genetic link, as well as the fact that the cancer was ER/PR positive, she and her husband decided not to have a second child. All of this gave them pause and she really just wanted to be there for her son. In addition, they were not sure if the treatment was going to be successful; it didn’t seem like a good idea to get pregnant. Now that she is on the other side of her treatments, there are times when she wishes she had done something differently to have it as an option. When he son was younger, he would often ask for a brother. Christy really wanted that for him.

Following her treatment, Christy went through dark days and a year long depression. She had attempted treatment through many different antidepressants. She feels that the emotional aspect of cancer is not being talked about enough. Keeping her anxiety in check was a fine balance. She had to distance herself from cancer. As she distanced herself, she began to feel emotionally stronger and slowly re-entered the breast cancer community. However, she felt it was still important for her to keep that balance.

Christy experienced capsular contracture and needed a revision to her implants. She didn’t know that revisions were even an option. Surgery brings up a lot of emotions and post-traumatic stress for her. She consulted with her plastic surgeon and it was recommended that she go larger. Christy did not know that having reconstruction after radiation was not a great idea. The capsular contracture developed in 4 months. She did not want to go bigger. She just imagined 2 bigger lopsided boobs. Christy had consulted with a well-respected surgeon who refused to treat her because she had undergone radiation. She remembered feeling upset with her plastic surgeon because it was okay when she wanted to swap her implants out but it was not okay when she wanted to have them removed.

Four years later, Christy decided that she would have her first revision. She shared with her cousin and her cousin asked if she had ever heard of breast implant illness. Christy had not but began researching it and was added to a Facebook group for breast implant illness. She looked through the information for a long time. When she made her first post, a fellow survivor had reached out and took Christy under her wing. Christy had attributed some of what she was feeling to the treatments. After some time, she decided that she wanted her implants removed. She had learned that saline implants had problems though she felt that they were the safer option.

Christy was traumatized to be pulled back in and have to experience it all over again. She felt a sense of betrayal that she did not know all of the information. She felt like she was in the dark and had questioned herself as to how she did not know. She and may other women feel shame and blame themselves for not being more informed but in reality, patients are too overwhelmed to be information. We cannot hold it against ourselves and have to let it go.

Christy formed a Facebook group called Fierce Flat Forward with a focus on breast cancer survivors who have explanted, women who have gone flat from the start, or are considering explanting. We was shocked that so many patients and survivors do not know that going flat is an option. Many feel that they have to undergo reconstruction and when patients and survivors learn different information, it is like going through phases of grieve. Remembers the feelings of being ashamed. Christy had thought of naming her group Fiercely Flat but decided to add Forward because at some point, we all have to move forward to make change and help others avoid the reconstruction nightmare. Anyone can join the group if considering the option of going flat. It is important for others to see that people are living flat happily and well.