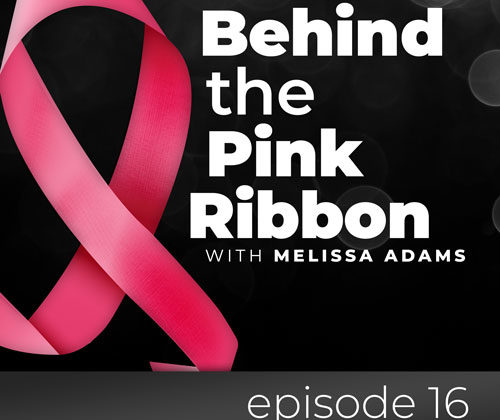 My friend, Christine McCoy, joined us on the podcast today. She shared her story of finding her lump during a self-breast exam. Christine contacted her doctor and was dismissed because she was too young and didn’t have any risk factors. She saw her PCP the next day and was told it was likely not cancer, but was sent for diagnostic testing. It was in fact cancer! She shared her course of treatment and the importance of having someone that can help with keeping track of information at appointments.

On this episode, my friend and breast cancer mentor, Christine McCoy, shared her story behind the pink ribbon. Christine was diagnosed on March 15, 2006 at the age of 31 years. She had been married for 7 years and at two small children at the time- 4 year old Katie and 1 year old Erin.

Christine found a lump in her breast while conducting a routine self breast exam. She immediately knew that it was suspicious. Throughout the day, she kept feeling it and imagined that it would be gone. She recalls that it felt very hard and was very firm, like a marble. Christine’s mother had always had cystic breasts and had gone through several surgical incisions. Christine thought that the lump was going to be the same and this would be the beginning of her own journey with cystic breasts.

Christine contacted her gynecologist that day. She wasn’t scheduled for an annual exam until the end of April/beginning of May. The doctor told her that since Christine was only 31 and did not have any risk factors, that she would be seen at her next appointment. Christine recalls that she sat with that for about 2-3 hours and then contacted her PCP. She was seen in the office the next day.

Her PCP felt the lump but didn’t think it was anything. However, the doctor made a referral for a diagnostic mammogram. Christine indicated that she was able to get in the following day for the mammogram. She had contacted a radiology office and they fit her right in. She indicated that things aligned beautifully. This was her first mammogram and she remembers that she was in the waiting room for a really long time. She didn’t realize that the it was taking so long because the doctor was looking at and assessing the mammogram. She was told at that time that the lump was highly suspicious for cancer. They had requested that she return the next week for a core biopsy but she ended up having the biopsy that day. She feels as though they took pity on her.

Christine was told that the results would be forwarded to her PCP within the week but her PCP had the results the very next day. When at work the next day, Christine received a phone call from her PCP’s office saying that they needed to see her. She was busy at work that day but the doctor pushed for her to come into the office. Christine did not realize that she was going to get the news that she had cancer. Christine went to her PCP’s office alone. She recalls that the doctor came in with tears in her eyes. At that point, Christine’s world had just crashed.

As soon as they told her she had cancer, they said that they were going to call her husband. Christine’s husband, Brian, her parents, and her girls were in the doctor’s office. She was all of a sudden surrounded by staff members and her family.

Christine does not have a family history of breast cancer. Her great grandfather had colon cancer at the age of 93 but elected not to have treatment. Initially, she was not offered genetic testing but once she was in her recovery process, she had requested it.

Through her husband, Christine was able to find a wonderful surgeon and was scheduled for surgery within 10 days of her diagnosis. The cancer was in her left breast. She recalls that she was in a very scared state and was willing to do whatever the doctor told her to do. Christine feels that she hadn’t done enough for herself to process the information. She the doctor came up with the plan, she simply agreed. Christine underwent a nipple-sparing lumpectomy. She had looked into a bilateral mastectomy but the recovery time was too much.

When Christine was coming out of surgery, she was told that she would have to undergo chemotherapy. She had 4 different types of chemo, every other week. She also had to undergo radiation. At that point, she thought she was finished with all of her treatments. When the tumor was tested, she found out that she was triple positive- ER, PR, and HER2. She was prescribed Tamoxifen and Herceptin. She took Tamoxifen for 7 years.

Christine recalls that chemotherapy was the most challenging treatment for her because of the exhaustion. She remembers being completely exhausted every minute of the day. It hurt to walk and sit. Her doctor had her on a good regime so she did not experience nausea but experienced nerve and bone pain. Christine had complete overwhelming exhaustion. She was bald everywhere and definitely had chemo brain. She indicated that for 10 out of the 14 days between each chemo treatment, she was useless.

Christine returned to work and felt like she was just going through the motions. She did not feel any joy in her work. She decided to go back to school for nursing. She was working on the oncology unit but experienced a lot of survivor’s guilt. After a year, her manager suggested that Christine move out of the oncology unit because she was too emotionally attached.