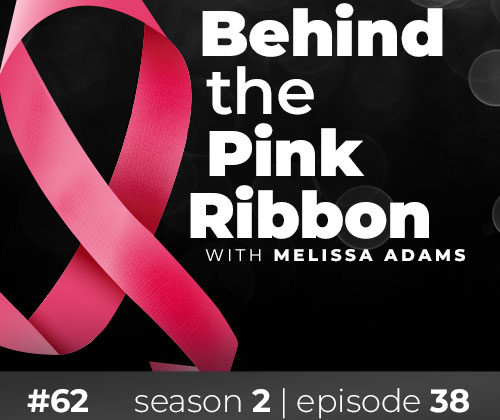 Cary Goldberg joined me on the podcast. She was diagnosed with late-stage 3 invasive ductal carcinoma. Cary talked about knowing something was wrong for several years but thought it was a blocked milk duct. She talks about her diagnosis, treatments, and decision to remain flat. Cary talks about being self-conscious but after being introduced to Handful bras, she regained her confidence. Cary shares how she became involved with Handful and how the company supports breast cancer survivors.

Cary Goldberg was 33 years old when she was diagnosed with late-stage 3 invasive ductal carcinoma. Carey recalls that she had always had an awareness of breast cancer after seeing an article of a women with a mastectomy. She swore that would never be her. This prompted Cary to get pregnant earlier than many of her friends in an attempt to reduce her chance of developing breast cancer. She also thought that breast feeding would help to reduce her chances.

At 30, following the birth of her first child, Cary felt a lump while breast feeding. She assumed it was a blocked milk duct. Without being seen by the doctor, she was prescribed an antibiotic that helped to decrease the pressure she felt in her breast but she continued to feel as though something was not right. Cary went on to have another pregnancy that ended in a miscarriage and again, felt something in her breast but assumed that it was still a blocked milk duct. After having her second daughter, Cary noticed that the lump began changing and it was something that need to be addressed. However, she did not feel any urgency to make an appointment to see her doctor so she decided to wait until her annual check-up.

Before she was due for an annual check-up, Cary had moved from New York to Portland, Oregon. When she called for an appointment, she was told that it would be 3 months before she could be seen. Cary shared that she had a lump and was seen the next day. The doctor told her that the lump had all of the characteristics of being a benign lump but recommended that she have diagnostic testing. Cary was told that there was no need to call her husband.

Cary recalls that that ultrasound was super traumatic. She was alone. The technician called in specialists and they all had a worried look on their faces. A biopsy was recommended and the physical pain was significant because the local anesthetic had not yet taken effect. She experienced physical and emotional pain of the tumor bursting and then also finding out that she had 9 positive lymph nodes.

Chemotherapy was recommended first due to the node involvement. All through chemotherapy, she was told that she would not need to see a plastic surgeon because the tumor would shrink and anything remaining could be addressed through a lumpectomy. The tumor was in fact getting smaller. However, when she underwent the lumpectomy, they were not able to remove all of the cancer. She had another lumpectomy with the same result. In that same time, she learned that the cancer with HER2+ and that there was DCIS all around the breast. Cary underwent a bilateral mastectomy and more tumors were discovered. Cary was in a rush to have surgery done in order to start radiation that she did not really have time to process everything.

The radiation oncologist indicated that they could not stall radiation to wait for reconstruction. The plastic surgeon she had consulted was not on board and recommended she delay radiation. Cary made the decision to go flat and has been happy with that decision. She used a thoracic surgeon who had never done a flat closure before but was happy with the results. The surgeon seemed a bit surprised at her decision but she made herself very clear on what she wanted. Over the years, Cary has considered other reconstructive options but always thinks about fitness, yoga, flexibility, and how the surgical options might interfere with that.

Cary shared that while she was happy with being flat, she was self-conscious. She changed in the bathroom at the gym and stood at the back of the class in yoga. A neighbor introduced Cary to Jennifer Ferguson, founder of Handful. Jennifer asked Cary to try a foundation garment and Cary did not think she needed one but tried it anyways and was amazed at how she looked and felt. Within 3 months, the unconscious rounding forward of her back had improved and she could wear her old clothing. Wearing the bra helped with Cary’s posture and her confidence. It contributed to her healing in a way that she did not expect.

She started helping with Handful and then never left. Eventually, she became part owner. Her role in the company is to reach out to survivors. The hope for survivors is that they can continue to move despite having gone through breast cancer. The company provides a lifetime 30% discount on all products. Survivors can use their mastectomy bra benefits for a Handful bra. If a woman is flat or has some disproportion, free pads are provided. The company donates 12.5% of the battle cry pink bra to Young Survival Coalition, with the 12.5% representing the 1 in 8 women still being diagnosed with breast cancer in this country.

Cary shared that the company meets the each woman where she is at.