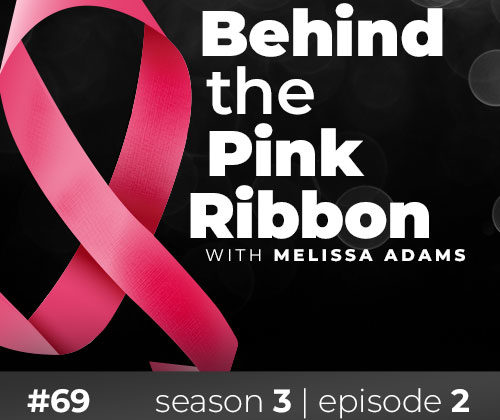 Becky Braun, a hometown friend since kindergarten, joined me on the podcast to share her breast cancer story. She was 36 when she was diagnosed with DCIS. Her diagnosis of breast cancer came a short 2 months after her mom had passed away from breast cancer. Becky shared her family history of breast cancer, with no link to a gene mutation. She openly shared her course of treatments, as well as the complications that she experienced. She also talks about the importance of a good medical team.

Becky Braun was diagnosed with ductal carcinoma-in-situ in 2013, only 2 months of the passing of her mother. She shared that in November 2012, her mother was rushed to the hospital. Through an x-ray, they found that her mom had cancer everywhere in her body but it took two and a half months to figure out where the cancer was coming from. In February 2013, a bilateral MRI indicated that cancer had started in the very back wall of her mom’s breast, which could not be captured on traditional mammography. Becky recalls that it looked like salt and pepper everywhere. Her mom was so sick that they never found out what kind of breast cancer she had and it had moved from her breast to her spine to her lung and then to her pancreas. Becky’s mom passed on March 14, 2013

During the time that her mother was going through breast cancer. Becky shared her mom’s experience with her PCP. She also shared that her older step-sister also had breast cancer. At the age fo 36, Becky was sent for what would be her first and only mammogram, which showed that she had DCIS in the right breast. Just as she had seen on her mom’s slides, Becky saw what looked like salt and pepper on her own. Becky remembers getting the call from her PCP on May 1st to tell her that she had breast cancer. She didn’t register what the doctor was saying because the doctor was using a lot of unfamiliar words.

In July 2013, Becky underwent a bilateral mastectomy. She was given the option of a lumpectomy along with some other therapy options. However, Becky felt that while her breasts are sisters and not twins, what happened in one might happen in the other. Following the surgery, it was discovered that Becky had DCIS in her left breast as well. She knew that she made the decision that was right for her. Becky pointed out in breast cancer, there is no easy science.

Becky opted to undergo reconstruction with implants. Her incisions were made under her breast to preserve the nipple. When she was released from the hospital, she was sent home in a velcro front-closure bra, which led to pseudomonas on the left side. The left breast incision had opened and the derma-mesh and cadaver-mesh could be seen. She recalled standing in the mirror watching water come out of her left breast. Becky drove herself to the hospital and was immediately sent in for surgery. Becky stayed in the hospital for a week on heavy antibiotics and admitted that it was one of the most relaxing weeks she has experienced.

While she didn’t have any major concerns with the healing process after that initial exchange, the right side did not heal correctly. Due to scar tissue, it made the right breast appear square and she had a bit of folding in the nipple area. She underwent corrective surgery in December 2019. She shared that she continues to experience a lot of numbness and no sensation in her breasts but she is happy with them.