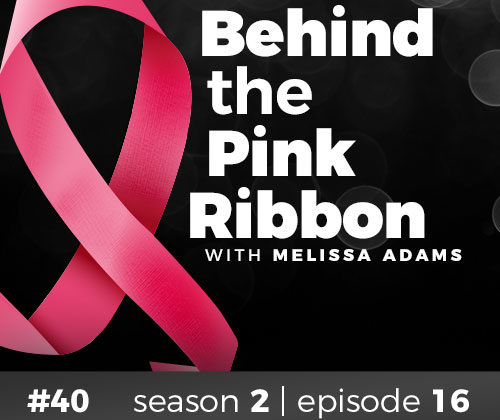 On this episode, Arpi Hamilton, joined us on the podcast. Apri found a pea size lump in her breast in September 2016. Though she was experiencing symptoms, she ignored those symptoms until December 2016. She scheduled an appointment with her gynecologist and had to beg to get a mammogram ordered. Arpi shares her treatment, how her journey has helped not only herself but also her coworkers at Cancer Treatment Centers of America. She also talks about the struggles she still faces 3 years later.

Arpi Hamilton was 38 years old when she was diagnosed with stage 3, triple negative invasive ductal carcinoma. She had always had lumpy, dense breasts and the lumps would come and go on their own. In September 2016, she woke up early the morning of a girlfriend’s wedding. He breast was sensitive to the touch and hurt. She found a small, pea size lump. Though she was having symptoms- the lump was growing, she had pain in her armpit, her bra was bothering her, and she was sleeping constantly, Arpi ignored the symptoms.

While on vacation, she recalls waking up on her stomach and feeling like she was laying on something. She rolled over and when she touched it, she felt a large mass on the upper quadrant of her breast. She was able to stretch out her fingers from her thumb to her middle finger and wrap her fingers around the mass. The mass spanned her cleavage to her armpit.

Arpi went to her gynecologist at Cancer Treatment Center’s of America where was worked. She had to be her doctor to write an order for a mammogram. The doctor thought that it felt like a blocked lobular gland and had no concerns at all that it was cancer. Arpi was able to get scheduled for a mammogram the following day and was immediately sent for an ultrasound.

The radiologist called her the following week and asked her to come back for the biopsy. Arpi agreed and once the radiologist requested a biopsy of her lymph nodes, she knew that it was cancer. Two days later, Arpi was diagnosed and the tumor was 8 cm. Two of 5 lymph nodes tested positive for cancer. Arpi shared that she does not have a family history of breast cancer. Her husband was out of the country at the time of her diagnosis and took it very hard because he could not be there to support her in that moment.

Due to the cancer being triple negative, she had aggressive chemotherapy. The chemotherapy shrunk the tumor a little bit. She initially thought that she would have a lumpectomy but her breast could not be preserved even with the chemotherapy before surgery. Arpi opted for a unilateral mastectomy with reconstruction and admits that she was not okay with that decision even up to the time that she was being wheeled into the operating room. She underwent radiation following surgery as well as additional chemotherapy.

Apri shares that she is not in a place where other survivors seems to be; she sees others who seem to be more accepting of their situation but she is not there. She continues to struggle. She suffers from post traumatic stress disorder. She sees that other women are moving forward but she believes that there are women like her who are looking in the rearview mirror, waiting for the other shoe to drop.

At the time of her diagnosis, Arpi was heavier. She was a 38DD and weighed 160 lbs. Slowly through her treatment, she lost weight. As a result of her weight loss and the impact of radiation, her implant is now failing. It is encapsulated and she experience chronic pain but she is hesitant to undergo another surgery.

Arpi openly talks about struggling with PTSD, anxiety, depression, and a bit of an eating disorder. She experiences fear around food; that it can cause cancer. She currently weighs 111 lbs. She did not think it was an issue but realizes that it is. People do not walk a day in her shoes and those diagnosed with triple negative have no further treatment. The only thing she can do it watch what she puts into her body. Arpi encourages others that if they are struggling to share it with other so that someone can hold you accountable.

Arpi believes that it is important for vets of breast cancer to still have a place and to provide a source of information, hope, and inspiration to the newbies.

Arp credits CTCA with saving her life. The institution is different from other specialists or centers as they focus on treating the whole person and have all of the specialists under one roof. CTCA has everything at one facility to help with individual through the process. They also provide supports and services to the caregivers.