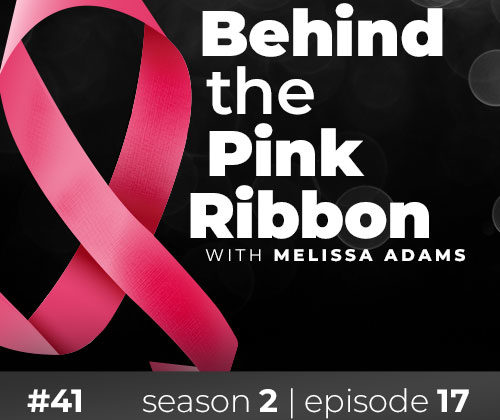 Andrea Stein Goldsworthy joined us on the podcast to share her journey with breast cancer. She was diagnosed in November 2005 at the age of 32 with stage 2B, invasive ductal carcinoma. Andrea has a long history of cancer in her family and always felt like she would one day face that battle as well. It came much sooner than she had ever expected. She talks about finding her lump, treatments, lacking a support system in her first husband, finding love in her current husband, and having a baby.

Andrea Stein Goldsworthy from Portsmouth, NH joined us on the podcast. She is a 14 year breast cancer survivor. She was diagnosed in November 2005 at the age of 32 with stage 2B invasive ductal carcinoma.

Andrea always had a strange feeling that she would get breast cancer some day. Her grandmother died of breast and ovarian cancer in the 80s. Andrea thought that if she got cancer, she would get it much later in life. Her grandmother was diagnosed when she was in her 50s. Breast cancer was always in the back of Andrea’s head. The maternal side of family has a long history of cancer.

In the summer 2005, her friend Deb was doing a photoshoot for a new breast cancer awareness foundation. Andrea was a stand in model. Deb gave Andrea a hang tag for the shower that showed how to do a self breast exam in the shower. That day, Andrea did a self exam and felt a lump in her breast about the size of a marble. She did all of the other parts of the exam and everything was true for her.

She called her gynecologist to schedule an appointment. This was the same doctor that said she would start order mammograms from Andrea at the age of 35 years given her significant family history. Andrea had just seen her gynecologist in May for a check up and did not feel anything at that time.

Andrea’s gynecologist sent her to a cancer center just north of Boston. Andrea had her first mammogram on Halloween followed by an ultrasound same day. She was sent off to lunch and told to return in a few hours. When she returned, she was told that she would need a biopsy as the ultrasound showed the lump she had found but also some friends. They also wanted to test her lymph nodes. Andrea had gone to the appointment alone as she thought it was going to be a quick mammogram.

Four days later, Andrea received the phone call at work on Friday at 5 pm to tell her that she in fact had breast cancer. Everyone from the office had gone except her boss. He was able to help support her as she processed the news and told her to wait until she can get more information and to seek out a second opinion. Andrea had to call her then husband to come pick her up because she was crying and shaking.

Andrea went to Dana Faber Cancer Institute for a 2nd opinion and liked their approach better. The doctor took a lot of time with Andrea. They also had a different protocol plan. The doctor at Winchester wanted to do chemotherapy, surgery, and then radiation. Andrea wanted to have a choice in her course of treatment. Her doctor at the Dana Faber Cancer Institute offered chemotherapy as a choice. It was highly recommended given the lymph node involvement but they gave her options. She had a totally different experience at Dana Faber. At Winchester, she did not feel a connection, did not feel comfortable and did not feel like she was going to be cared for.

Andrea was given the option of a full mastectomy or a wide excision. She isn’t sure if the doctor did not tell her or if she didn’t hear that she could do an expander if she hadd a mastectomy. They didn’t really talk about reconstruction at the time. Andrea went with the wide excision because to her, it seemed like less of a hack job. She had a big chunk missing from her breast. The doctors wanted to wait at least a year to do reconstruction because had to do chemo and radiation. Andrea had to wear a prosthetic to fill it and tried many different options; nothing felt good.

During chemotherapy, Andrea lost hair, eyebrows, eyelashes. She decided she did not want to have hair falling out in chunks. She had a shave night party and shaved it into a mohawk first.

Andrea had been tested for any positive genetic mutations several times but each panel of assessments indicates that she is negative for any known mutations. Geneticist was getting frustrated that it was negative. It seems odd that she has a significant family history of cancer and yet there is not link to a genetic mutation.

Andrea’s ex-husband was less than supportive. She knew that the journey would be long and lonely the night she was diagnosed. Her family, including her in-laws, had come over. Her husband drank himself to a point where he was falling in the streets. She went to be crying anded alone that evening. She found support in not only her family but also her ex-husbands family. She also found support in some unlikely places. She had neighbors that were really helpful and also had support from her coworkers.

Andrea divorced her husband in 2007. She met her current husband, Craig, online and they were married in 2014. Andrea had stopped her medication and they decided that they would try but not really try to have a baby. In January 2015, Andrea was pregnant and together they have a little boy, Alex. Andrea is so amazed and in awe of Alex. She has had fears of possible recurrence and what that would mean for Alex. She truly believes that he is a blessing in her life. Craig is supportive and is learning to navigate the cancer world as Andrea had several reconstructive surgeries this past year.

Currently, Andrea is advocating for Metavivor, not only to bring awareness but to help breast cancer become a chronic illness rather than a terminal illness. She feels that doctors should talk to patients about the possibility of stage 4 breast cancer even though it is scary. Patients should be made aware.